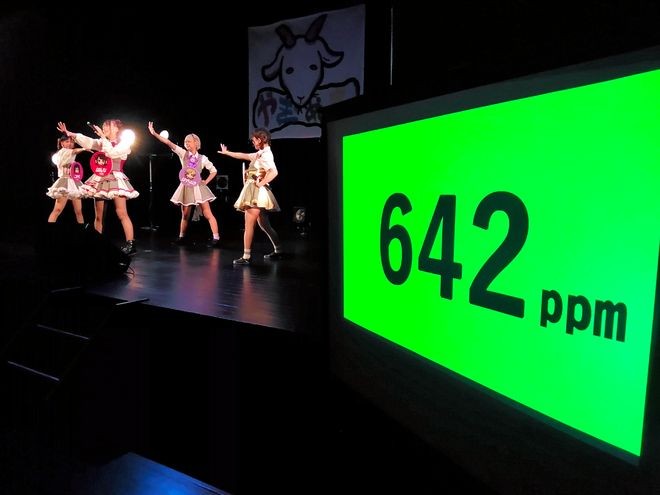 The CO2 concentration level in the air is shown on a large screen at a live concert in Tokyo’s Chiyoda Ward. (Provided by Yo Ishigaki, a specially appointed associate professor at the University of Electro-Communications)

At a recent live pop concert in Tokyo's Chiyoda Ward, the large screen set up at the edge of the stage didn't give the audience a close-up view of the idol or any other eye-catching visual.

Instead, it changed colors to show the carbon dioxide (CO2) level in the air, in an unconventional effort to contain the spread of COVID-19.

During her performance, a pop star on the stage watched the screen and said the CO2 concentration “appears green, which means this live concert is peaceful.” Her comment drew laughter from the spectators.

The display turns green when the CO2 concentration is 1,000 parts per million (ppm) or less, because the figure indicates the air indoors is being appropriately exchanged.

When the meter was exposed to the breath from one of the performers during the event, the screen color changed to red to show an increase in the CO2 level.

“Look at this to see the monitor quickly returning to green,” said the singer. “The hall is well ventilated, so enjoy our performance without any worries.”

The screens are being installed at concert venues, restaurants, airports and other public places.

Showing the airborne CO2 concentration is expected to make clear whether the sites are ventilated properly, helping prevent the “three Cs” of closed, crowded and close-contact settings.

Indoor concerts are often said to pose the threat of a three-Cs environment, as performers sing and spectators sometimes dance in confined spaces.

The concert would have been suspended for improper ventilation reasons if the reading had topped 3,000 ppm, but the figure never reached the limit during the half-day event.

WHY THE CO2 LEVEL IS MEASURED

CO2, a substance found in the breath in large amounts, spreads easily in the atmosphere, so changes in the CO2 concentration are a useful indicator to identify how closed and crowded the space is.

For that reason, the Japan Society for Occupational Health states the CO2 level of 1,000 ppm or lower suggests the room is well ventilated based on the building hygiene control law and other criteria.

Under its recommendation, a room with a reading of higher than 3,500 ppm has an extremely bad ventilation capability, so the facility should not be used as a countermeasure against the novel coronavirus.

According to data from the Japan Meteorological Agency, the global average CO2 concentration is around 400 ppm outdoors.

The society has also made available a simulator on its website (http://jsoh-ohe.umin.jp/covid_simulator/covid_simulator.html), so the CO2 level for a site can be predicted if such factors as its size, how many people are there and the presence of ventilation equipment are input.

The September experiment at the live concert was carried out by Yo Ishigaki, a specially appointed associate professor of informatics at the University of Electro-Communications, and Tomoaki Okuda, a chemistry professor at Keio University.

Under their program, the two researchers surveyed CO2 concentrations at many live concert sites in Tokyo. In one case, the reading reached 6,000 ppm within 60 minutes from the event’s beginning, while a facility recorded more than 10,000 ppm at one point.

Direct correlations between the CO2 level and the risk of contracting COVID-19 have yet to be confirmed.

But Okuda estimated the CO2 level at a restaurant in China where many infections were reported based on its room arrangement and population, and found the CO2 reading likely rose there similar to concert sites with high concentration levels.

“I feel infection risks could be affected by how well the site is ventilated,” said Ishigaki.

In May, the operator of Nanki-Shirahama Airport in Shirahama, Wakayama Prefecture, introduced a CO2 detector fitted with a human sensor to count people at the waiting room for departing passengers.

The measured CO2 concentration is combined with data on the population density and degree of noise, allowing whether the space boasts the three-Cs settings to be determined.

The CO2 reading is shown on the monitor at the waiting room, and staffers can check collected data on their smartphones at any time. When the three-Cs conditions are detected, ventilation will be increased and a warning issued for passengers.

As there are no obvious standards for the so-called three-Cs settings, airport staff members comprehensively consider all gathered pieces of information to make a decision.

Ryota Morishige, head of the airport operator’s passenger attraction and local revitalization department, said the system was put in operation at the waiting room, where up to 165 people stay before their boarding.

“We had taken countermeasures, such as putting foot marks on the floor for people to maintain distance from one another but a mechanism is essential to decide if the room is a proper three-Cs environment,” said Morishige. “Showing data on the monitor gives a feeling of safety among passengers.”

CO2 measuring is spreading as a means to contain the virus.

Information technology provider Uhuru Corp. in Tokyo’s Minato Ward, which offers the system to mitigate the three-Cs danger for the airport, said the same service is being used at sports clubs and restaurants as well.

Expecting demand for such a system to grow among popular restaurants and event sites under the government’s “Go To Eat” and other economic stimulus programs, major communications carriers, machinery makers and various other companies have entered the CO2 monitoring system business.

Ishigaki worked with Yaguchi Electric Corp. in Ishinomaki, Miyagi Prefecture, to develop a portable CO2 meter that is designed to be connected to a smartphone. It went on sale in August.

Masatoshi Sato, president of Yaguchi Electric, said the company has received many inquiries about the meter.

“Many restaurants and other operators want to show the risk of the three-Cs in a visualized form,” he said. “With our production capacity limited, I am sorry that those who now place orders have to wait a little while to receive the product.”