Cheetahs at Chiba Zoological Park are trained to chase after balls and decoys as part of efforts to heighten their reproductive capabilties. (Video footage by Kazuhiro Nagashima) 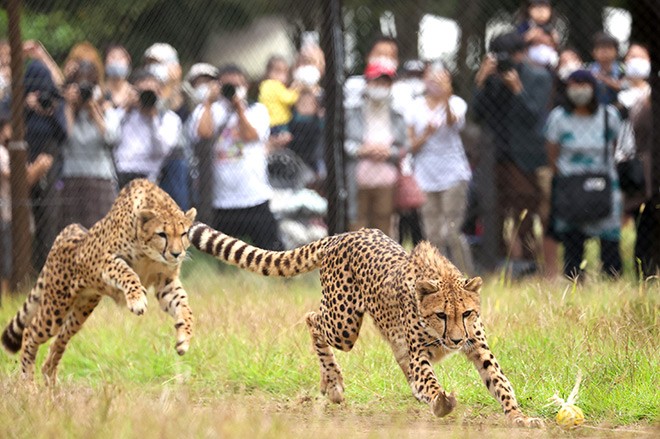 CHIBA--Visitors to the local zoo here can now witness the world's fastest land mammal sprint right before their eyes.

If their eyes are fast enough, that is. Cheetahs can reach speeds of 120 kph.

Chiba Zoological Park began its “cheetah run” on Oct. 13 and plans to hold the attraction once or twice a week.

Its cheetah facility, which opened in July, features a 60-meter straightaway and 140-meter oval where the animals are taught to chase decoys pulled by a motorized wire. The entire facility runs 2,200 square meters.

The zoo had two of its seven cheetahs take part in the run on Oct. 13, sisters Ajabu and Aywa.

Cheers broke out in the crowd as the pair demonstrated lightning starts and stops in front of obstacles.

While the attraction offers great entertainment for visitors, the main objective of the runs is to strengthen the reproductive capability of the cheetahs, which are designated as endangered in the International Union for the Conservation of Nature (IUCN)’s Red List.

Raising them in as close to a natural environment as possible is said to assist that.