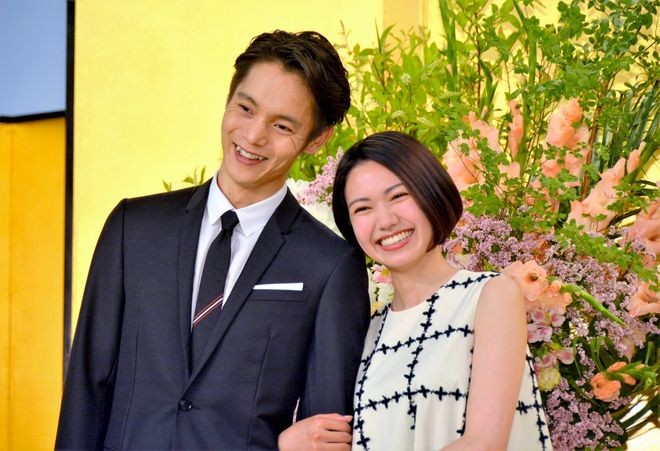 Masataka Kubota acting as the protagonist of "Yell", Yuichi Koyama, and Fumi Nikaido acting as his wife on July 19, 2019 (Asahi Shimbun file pthoo)

When writing this column, I always keep in mind that some people will be having their breakfast as they read my words. That is why I make a point of avoiding graphic depictions of savagery and violence. But I deliberately break this rule when I want to highlight the horrors of war.

It is my hunch that my stance is shared by the producers of "Yell," a serialized television drama currently being aired on weekday mornings by NHK (Japan Broadcasting Corp.).

An episode aired this past week contained gruesome scenes of combat during the Pacific War.

The protagonist, composer Yuichi Koyama, was caught in a firefight in Burma during a visit there to entertain the front-line soldiers, and witnessed them die.

Koyama's character is modeled on composer Yuji Koseki (1909-1989), whose well-known works include the Hanshin Tigers baseball team song "Rokko Oroshi" and "Nagasaki no Kane" (The Bells of Nagasaki).

He also composed numerous military songs during the war.

In the drama, Koyama becomes almost unhinged when he realizes that he "knew nothing" about the reality of war. And he is deeply tormented by the realization that his songs must have driven young men to their deaths in the battlefield.

The real-life Koseki was never involved in actual combat, but he almost got caught up in the fighting during his three visits to the front line to entertain the troops.

He once noted that his heart ached whenever he thought about the men who went to battle singing his songs.

However, it is not clear from his autobiography whether he blamed himself as bitterly as portrayed in the drama.

The fact that artists, literary figures and journalists participated in the nation's war effort is a subject that must be subjected to scrutiny over and over. Some became consumed with guilt, and others did not.

Perhaps the producers of "Yell" are trying to fathom Koseki's inner conflict, or to portray him as they would have liked him to be.

Sometimes, fiction has the power to get to the essence of history.

After the war, Koseki continued to compose pieces that brought hope to people.

I am looking eagerly forward to find out how his fictionalized character will be depicted from next week.