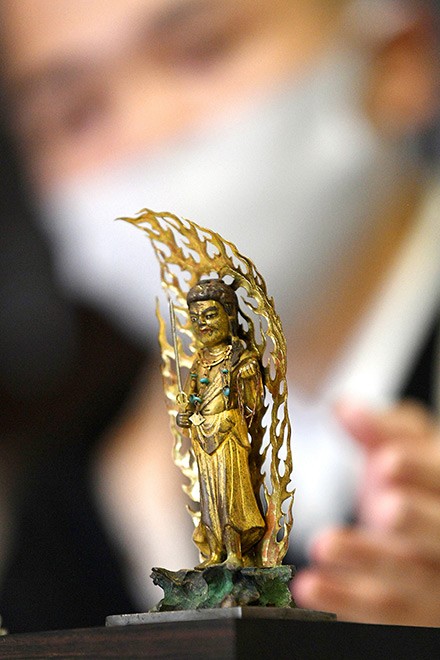 Priests at ancient Enryakuji temple on Mount Hieizan overlooking Kyoto are playing the role of detective in trying to solve a mystery that turned up in their collection of Buddhist deities.

It concerns a rare gold-plated statue depicting Fudo Myoo, one of the five kings of wisdom. Where it was found added to the puzzle.

The 9.5-centimeter-tall statue was concealed inside a wooden statute of Goho Doji, a deity in the form of a child that is said to obey high priests in protecting Buddhist teachings.

The 76.5-cm-high Goho Doji statue is thought to have been created during the latter part of the Kamakura Period (1185-1333).

At Enryakuji, the deity is also considered the patron saint of ascetics who take part in a ritual called Kaiho Gyo that involves traveling around the forests of Mount Hieizan over a considerable number of days. The most physically demanding journey lasts for 1,000 days.

Enryakuji is the head temple of the Tendai sect of Buddhism in Otsu, Shiga Prefecture, and a World Heritage site.

In Buddhism, the Fudo Myoo is considered a reincarnation of the Dainichi Nyorai Buddha. The Fudo Myoo is often depicted with an angry look with flames leaping up in the background.

The tiny statue is entirely gold-plated, including the flames. An analysis of the copper used in the statue dates it to between the latter half of the 13th century and the first half of the 14th century. It was likely placed within the Goho Doji statue when it was completed.

“This is the only example of a gold-plated Fudo Myoo in existence,” said a temple official. “It was likely created to demonstrate the strength of religious belief.”

The statue and other national treasures are now on display at Enryakuji in a special exhibition that is due to run until Dec. 6.

The statue will also be displayed next year at the Tokyo National Museum’s special exhibition slated for Oct. 12 through Nov. 21.