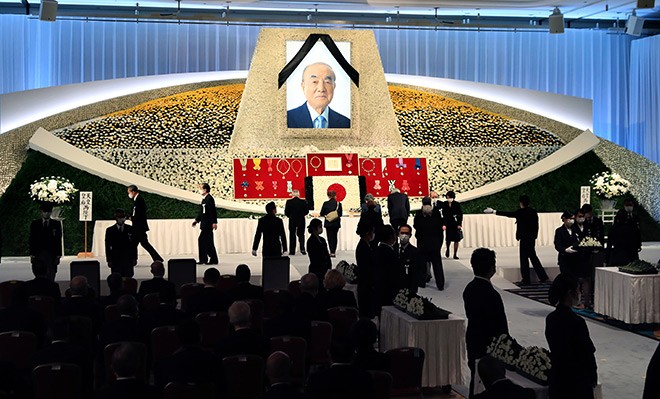 A joint funeral that sparked criticism for its lavish cost to taxpayers and a government request to schools to show mourning was held on Oct. 17 for former Prime Minister Yasuhiro Nakasone.

The funeral, jointly held by the Cabinet and ruling Liberal Democratic Party, had been delayed from March due to concerns about the novel coronavirus pandemic.

Prime Minister Yoshihide Suga spoke at the funeral and touched upon Nakasone’s privatization of the national railways as well as the state telephone and tobacco monopolies.

“He pushed through privatization from the standpoint of restraining the bloating of the administrative branch and allowing the private sector to freely exercise its ingenuity,” Suga said. “While thinking about the future of our nation, he also implemented other necessary reforms and contributed to peace and prosperity in the international community. I will make every effort to carry on his spirit of reform in dealing with various political issues.”

Opposition lawmakers raised questions about the cost of the joint funeral when Chief Cabinet Secretary Katsunobu Kato said at a September news conference that the government and the LDP would cover the approximately 190 million yen ($1.8 million) in expenses.

Moreover, the education ministry sent out notices to all national universities and prefectural boards of education asking that expressions of sympathy toward Nakasone be shown in some form.

Teachers criticized the request as threatening the political neutrality of schools.

Despite such concerns, some schools around Japan did fly flags at half-staff or raised mourning flags.

The flag at Takasaki High School, Nakasone’s alma mater in Gunma Prefecture, flew at half-staff from the morning of Oct. 17.

Principal Satoshi Kato said the half-staff display was out of respect and sympathy for a great former student and had nothing to do with the request from the education ministry.

A number of elementary and junior high schools in Kanazawa of Ishikawa Prefecture on the Sea of Japan coast also displayed mourning flags in response to a request from the city board of education. But board officials said the decision was left up to each school principal and no school was forced to comply.

One junior high school raised a mourning flag. Although it was a Saturday, students were attending class to make up for the period when classes were not held due to the novel coronavirus pandemic.

However, students were not asked to observe a moment of silent prayer for Nakasone. A school official said it was only natural to comply with the city board of education’s request.

A Kanazawa elementary school also flew its flag at half-staff in response to the request but students were not asked to observe a moment of silent prayer.

(Amane Sugawara and Yuichi Nobira contributed to this article.)