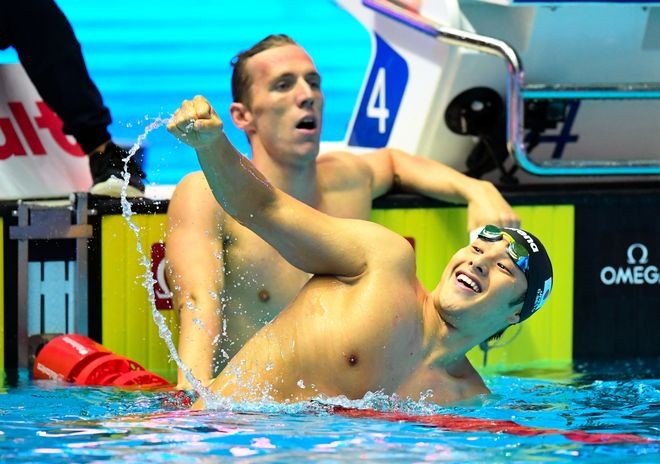 The Japan Swimming Federation (JASF) apparently faced a difficult decision in suspending Daiya Seto, one of the nation’s leading swimmers, for the rest of the year over an extramarital affair.

One JASF official said questions were raised on whether the sport organization should be punishing an athlete for a private-life matter.

The federation on Oct. 12 interviewed Seto about the extramarital affair that was reported in a weekly magazine. The following day, an extraordinary meeting of JASF managing directors decided to suspend Seto for violating the “sportsmanship” provision of the organization’s athlete qualification rules.

Sportsmanship is defined in the rules as an attitude for “maintaining dignity as a good citizen and a sound member of society” and for “contributing to the enhancement of the status of swimming as a sport.”

The directors decided that some form of punishment was inevitable because Seto, with his informal place on the Olympic team, is practically a member of Japan’s national team, the JASF official said.

Seto, 26, won a bronze medal in the 400-meter individual medley at the 2016 Rio de Janeiro Olympics and claimed double golds in individual medleys at the FINA World Championships last year.

He is the sole swimmer to have been offered an informal place on Japan’s Olympic team, and he was named captain of the national swim team.

“I will seriously face up to swimming with the determination to start everything over,” Seto said in a statement released after the punishment was announced.

A suspension is a punishment second only to permanent expulsion in terms of severity.

But Seto’s suspension will only last until the end of the year, a period with few swimming meets scheduled. And even without the punishment, an unaffiliated Seto would not have been qualified to compete in the events because of JASF provisions.

He remains an informal member of the Olympic team and can use a facility of the Japan Institute of Sports Sciences, one of his training bases, during the suspension.

He will be allowed to compete in events in the new year if he finds a new affiliation.

“I think the JASF faced a tough decision,” said Toshihiko Fujie, professor emeritus with the Chiba University of Commerce, who is well-versed in corporate risk management.

“The public eye is unforgiving when it comes to marital infidelity, so some punishment appeared necessary,” Fujie said. “But at the same time, imposing a heavy punishment was not OK because of hopes for his spectacular showing in the Olympic Games.

“Officials probably settled on the punishment after considering different factors and taking the middle ground,” he said.

Seto has been punished in other ways since a weekly magazine reported in late September that the swimmer, who has been married since 2017 and has two children, met a woman, who is not his wife, at a hotel.

He admitted to the fact and apologized. He resigned as captain of the Olympic team and terminated an agreement to serve as a “symbol athlete” for the Japanese Olympic Committee.

Seto and his wife used to appear in a commercial for food manufacturer Ajinomoto Co. But the company canceled the booking agreement for the ad following the report of his affair.

All Nippon Airways Co. ended a four-year affiliation agreement with Seto, which was to continue until March 2021, on grounds that he “fails to live up to the image the company was looking for.”

Japanese sport organizations have given harsher punishments for outside actions.

Badminton player Kento Momota was banned from games for an indefinite period after he was found in 2016 to have gambled at an illegal casino.

Japanese basketball players who paid for prostitutes during the Asian Games in Indonesia in 2018 were disqualified from official games for a year.

(This article was written by Takeshi Teruya and Midori Iki.)