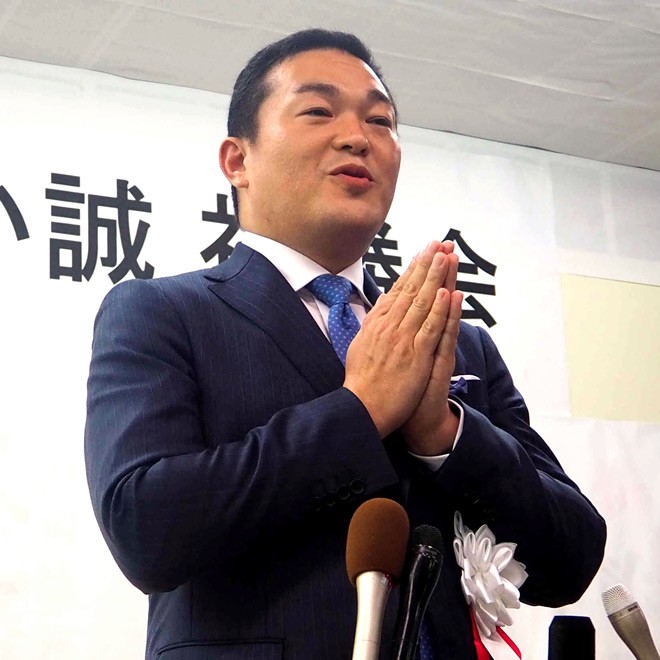 Makoto Sugioka clasps his hands in prayer in Iitate, Fukushima Prefecture, on Oct. 10 after he was elected uncontested as village mayor. (Eiichiro Suganuma)

IITATE, Fukushima Prefecture--The mayor-designate of this northeastern Japan village rendered uninhabitable by the 2011 Fukushima nuclear disaster is a Buddhist priest with a background in nuclear physics.

Makoto Sugioka, 44, said he is determined to lead his generation to find a solution to problems emanating from the catastrophe that still haunts the community.

"Radiation fell from the sky with snow. This unprecedented situation, never before observed even in the world of physics, is still continuing," Sugioka told reporters after he won the mayoral election uncontested on Oct. 10.

He is set to replace the 73-year-old six-term incumbent on Oct. 27.

"My decisions on what we can do next will be based on my basic knowledge of radiation," Sugioka said.

The mayor-to-be joins his hands in prayer when he meets people because he also acts as head priest of a Jodo Shinshu sect temple that has served the village for six generations.

Born in Tokyo, Sugioka was adopted by his grandfather, who was the head priest of the temple, before he started junior high school.

Inspired by a high school teacher who was once a rocket engineer, Sugioka went on to attend the Physics Department of Nihon University's College of Science and Technology before studying nuclear physics at the Graduate School of Tokyo Institute of Technology.

During that time, Sugioka also underwent training to take over the temple one day and shaved his head to become a priest when he was a second-year high school student.

As a gesture of thanks to those who supported the temple, Sugioka took a job at the municipal office when he was 25 years old. He worked there for 19 years until he quit to run for mayor.

Three and a half years have passed since the village was declared inhabitable again and the evacuation order was lifted.

Still, only about 1,400 people, or 20 percent of the pre-disaster population, have returned to the village.

"Most of the villagers died during the great Tenmei and Tenpo famines (during the 1780s and 1830s, respectively), but the village has bounced back from those crises," Sugioka said.

"I plan to perform my duties by envisioning what life will be like in our village 200 years from now."