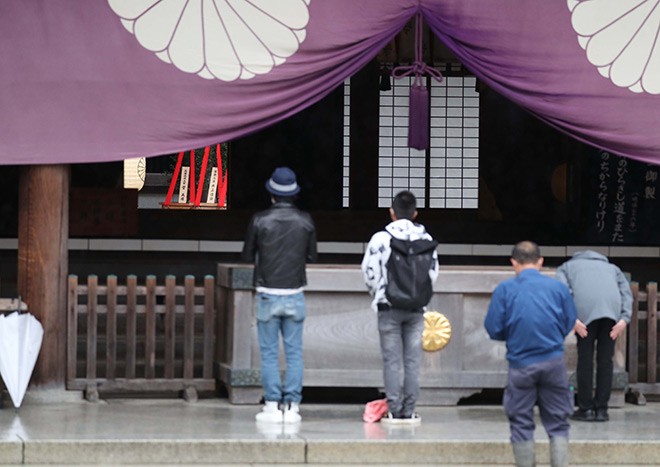 The “sakaki” branches offered by Prime Minister Yoshihide Suga are seen at left with red cloth at Yasukuni Shrine in Tokyo on Oct. 17. (The Asahi Shimbun)

Former Prime Minister Shinzo Abe, who stepped down in September, visited Yasukuni Shrine in Tokyo on Oct. 19, his second visit to the war-related shrine in a month.

Abe’s visit came a day after the autumn festival ended at Yasukuni, which honors Class A war criminals along with the nation’s war dead.

“We understand that Abe, a private figure, visited Yasukuni Shrine as an individual,” Chief Cabinet Secretary Katsunobu Kato told a news conference on the same day. “It is an issue related to the freedom of religion for an individual, and the government should not intrude on it.”

Abe last visited Yasukuni on Sept. 19, three days after he was replaced as prime minister.

A visit by Abe in December 2013, about a year after he started his second stint as prime minister, triggered such an uproar from China and South Korea that he never again visited Yasukuni while he was the nation’s leader.

Abe offered sacred “sakaki” branches at the spring and autumn festivals at the shrine. He also made a ritual offering of “tamagushi-ryo” to pay for a branch of a sakaki tree every Aug. 15, when Japan marks the end of World War II.

“We understand it was an act as a private figure,” he said. “It is an issue related to the freedom of religion for an individual, and the government should not intrude on it.”

Suga offered sakaki branches under the name of “Prime Minister Yoshihide Suga.” But Kato said the title is customarily used to represent an individual in that position.