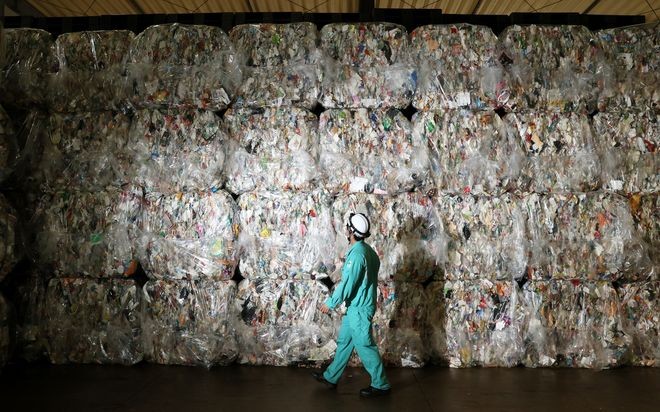 A mountain of plastic waste accumulates at an intermediate waste disposal facility for recycling in Neyagawa city, Osaka, in May, 22. (Hosokawa Taku)

Environmental groups in Japan recently urged the Japanese government to focus more on creating a society that produces and consumes much less plastic in its policy efforts to tackle the dire problem of plastic waste.

Twenty organizations devoted to environment protection including the World Wildlife Fund Japan, Greenpeace Japan and the Nature Conservation Society of Japan on Oct. 13 handed their joint policy proposal to Environment Minister Shinjiro Koizumi and another top policymaker at the ministry.

The case is compelling. The government should take the proposal seriously and incorporate it into its environment policy.

The proposal is intended as a response to the government’s environment policy paper published last month, titled “The Basic Direction of the Future Policy for Recycling Plastic Resources.”

Even though the government also called for “thorough efforts to reduce” plastic consumption, the groups criticized its approach to the issue for over-reliance on promoting the use of “alternative materials” and plastic “recycling.”

They called on the government to come up swiftly with effective policy actions for a substantial reduction in the nation’s overall plastic production and consumption, which they say is of critical importance.

The basic law for the promotion of the recycling-oriented society, which took effect two decades ago, stresses that in policy efforts to curb environmental impacts the priority should be on reducing the amount of waste generated. The groups’ proposal made a convincing case for a return to this principle.

According to the proposal, Japan produces more than 8.9 million tons of plastic waste annually, over 80 percent of which is incinerated, buried or exported. Plastic containers and packaging, mostly single-use plastics, account for nearly half the total.

Burning plastics generates carbon dioxide, while land for burial of waste is running out. In addition, it has become increasingly difficult to export plastic waste in recent years.

The situation clearly argues for greater efforts to reduce plastic use. Expanding the use of alternative materials of natural origin is one way to tackle this environmental challenge.

But it should be noted that this approach could cause other environmental problems, such as deforestation.

The government plans to thrash out specific measures to deal with the issue by the end of the current fiscal year, which runs through March. There have been encouraging signs of change in people’s attitude toward the issue due in part to policy measures, including charging customers for plastic shopping bags at retail stores, which started this summer.

But such plastic bags constitute less than 10 percent of the nation’s total plastic waste. Stronger policy actions are needed for significant progress.

Obviously, society-wide efforts are vital for remedying the problem. The government should consider a system to make plastic producers responsible for collecting, reusing and recycling plastics as well as a program to cut back on consumption.

Manufacturers and retailers should be committed to promoting the use of non-plastic materials for containers, packaging and trays and selling things loose or by weight. A significant shift in consumers’ mindset is also vital.

Japan is a leading producer of plastic waste, with the amount of its per-capita single-use plastic waste second only to that of the United States.

Japan has a duty to demonstrate a stronger commitment to reducing plastic waste as part of its contribution to the health of this planet.