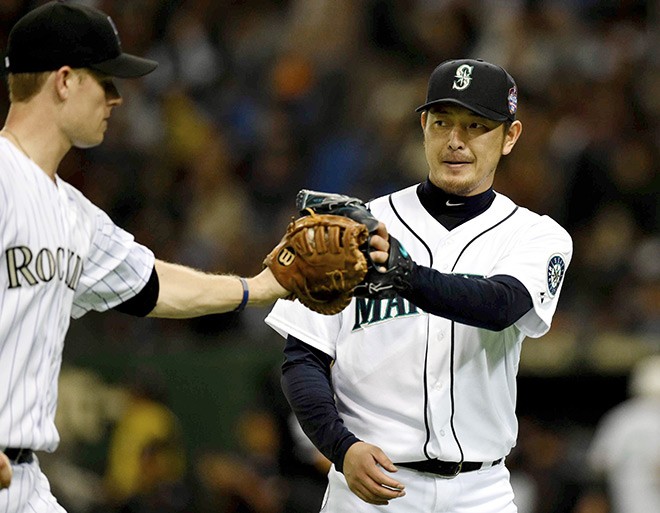 Forced changes to baseball mechanics have derailed the careers of many ballplayers, but Hisashi Iwakuma improved spectacularly after the adjustments.

Despite nagging injuries and even a ban on his throwing style, Iwakuma retained a high level of pitching that brought him success around the world for nearly two decades.

But after 170 career victories in Nippon Professional Baseball and the major leagues, the 39-year-old righthander will retire at the end of this season, his current team, the Yomiuri Giants, announced on Oct. 19.

He will announce his retirement on Oct. 23.

Iwakuma, who played at Horikoshi High School, was drafted by the Kintetsu Buffaloes with the fifth pick in autumn 1999.

In 2004, he won 15 games for the second straight year, the most in the Pacific League.

Iwakuma also joined the Japanese national team for the 2004 Athens Olympics, which came home with the bronze medal.

In the offseason in 2004, the Kintetsu Buffaloes and the Orix BlueWave merged, and Iwakuma transferred to the newly formed Rakuten Golden Eagles.

Masataka Nashida, the Kintetsu Buffaloes coach in those days, described Iwakuma as “the last ace pitcher on the team.”

“I really liked this player, so I am going to miss him,” Nashida said after learning that Iwakuma was calling it quits. “Although he was a little bit thin at that time, the flexibility of his arm was wonderful, and his high spinning straight balls were at the highest level.”

Nashida added, “He did a great job to help my team win the league pennant in 2001, and became one of the greatest pitchers in Japan.”

But the right-hander had to make some adjustments.

He was forced to give up his “two-stage motion” pitching style after the NPB prohibited that technique from the 2006 season.

And in autumn 2007, he underwent surgery for an injured right elbow.

However, after the surgery, his forkball improved and he stopped exerting too much power behind his fastball. He threw fewer balls and gave up only three homeruns in the 2008 season.

“I cured all the bad parts,” he said at the time.

His scowl turned into a smile on the mound, and for good reason.

That season, he notched a league-leading 21 wins and had the highest winning percentage and the stingiest ERA.

He was named league MVP and won the Sawamura Award as Japan’s top starting pitcher.

His pitching form was described as “beautiful” and he was given the nickname “Sendai’s nobleman” because the Eagles are based in that city.

Iwakuma carried his success internationally at the second World Baseball Classic (WBC) held in 2009. His stellar performance in that tournament, including his start in the final game against South Korea, was a big reason Japan won the championship.

In 2012, Iwakuma joined the Seattle Mariners as a free agent.

In the game against the Baltimore Orioles in August 2015, Iwakuma became the second Japanese pitcher, after Hideo Nomo, to throw a no-hitter in the big leagues.

But the injury bug followed him.

In September 2017, he underwent an operation on his right shoulder and could not return to the major leagues.

He signed with the Yomiuri Giants in the Central League in 2018 but has not pitched with the top team because of the shoulder injury.