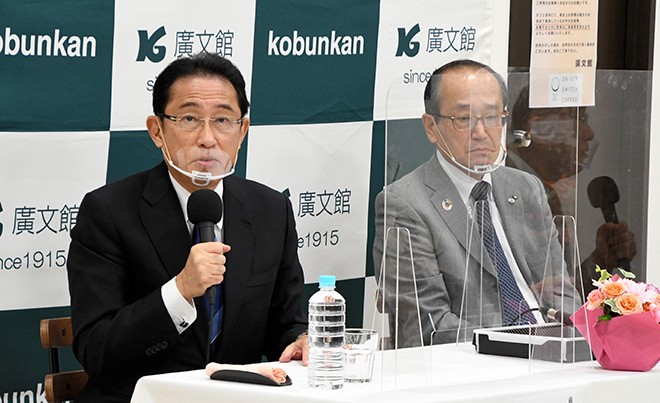 Fumio Kishida, a former policy chief of the ruling Liberal Democratic Party, during an Oct. 18 event in Hiroshima with Mayor Kazumi Matsui to mark publication of his second book (Kohei Higashitani)

HIROSHIMA--Fumio Kishida, a former policy chief of the ruling Liberal Democratic Party who has served as foreign minister, holds little hope for a nuclear-free world while the nuclear powers continue to snub attempts to achieve global disarmament.

Kishida, who represents an electoral district in Hiroshima Prefecture, was speaking Oct. 18 at a talk session with Hiroshima Mayor Kazumi Matsui held in the city’s Naka Ward to mark the publication of his new book.

Publication of Kishida's second book followed his defeat against Yoshihide Suga in the party’s presidential race in September to find a replacement for Prime Minister Shinzo Abe, who quit for health reasons.

In his book about his views of a world without nuclear weapons, Kishida writes about his connection with Hiroshima, which marked the 75th anniversary of the atomic bombing in August, and former U.S. President Barack Obama’s historic visit to the city in May 2016 when he was foreign minister.

“To me, ‘hibakusha’ and ‘death from the nuclear bomb’ are very real,” he writes, referring to his childhood experience of listening to his grandmother’s account of the devastation caused by the Aug. 6, 1945, event.

The Japanese government maintains a position of refusing to sign the Treaty on the Prohibition of Nuclear Weapons on grounds the country relies on the U.S. nuclear umbrella for its protection.

“It is remarkable that it pursues an ideal,” Kishida said of the treaty, which needs to be ratified by only a few more countries and regions to take effect.

“But the nuclear powers are not joining the treaty,” he said. “Faced with a reality where nuclear weapons will not be abolished unless those nations are persuaded to join the effort, Japan needs to think about how to bring them and the countries working for the treaty together.”

Kishida called for a framework that covers not only countries but also terrorists and groups who have the potential to compromise nuclear security because discussions about nuclear weapons are changing.

“I want the central government to discuss (the abolition of nuclear weapons) so that the feelings of Hiroshima will be shared as a common view in society,” said Matsui.

Kishida on Oct. 18 also visited the Hiroshima Peace Memorial Museum, which reopened in April 2019 after renovations, for the first time.

“As a Diet member from a city where the atomic bomb was dropped, I renewed my commitment to working toward a world without nuclear weapons,” he told reporters after the visit.

(This article was written by Kohei Higashitani and Takashi Togo.)