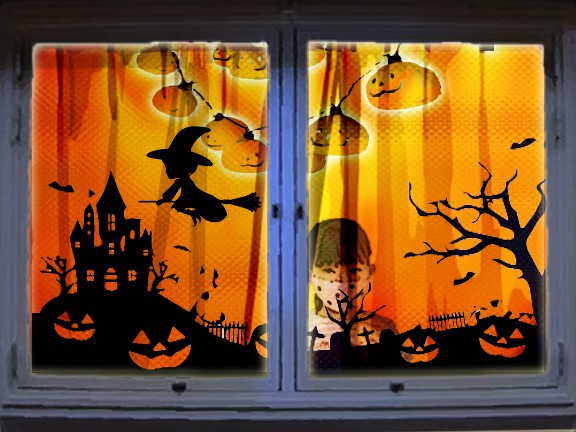 the last of her tribe
she sends her spirit
to the ancestors
--Pat Davis (Pembroke, New Hampshire)

The haikuist scanned the horizon waiting for a ship to appear off the Persian Gulf coast. Contemplating a sailing vacation, Krzysztof Kokot may have been warned about pirates or being mugged in the old section of Zanzibar city known as Mji Mkongwe. Priscilla Lignori was approached by a worried-looking stranger.

Dina Towbin read a Halloween story in Washington, D.C. Satoru Kanematsu wondered if the U.S. president received a trick or treat. To keep her spirits up, Helga Stania takes a daily dose of very dark chocolate from Ettiswil, Switzerland.

Slinky, slimy she
Slithers into my slippers
Slinks into my dreams

Streets in North America will darken early for Halloween tomorrow as it’s the end of daylight-saving time, but there’s going to be a full moon. Teiichi Suzuki stayed up reading about the fall of Genghis Khan.

Moon flower--
An empire disappeared
from the desert

Homeowners put jack-o’-lanterns on display this month hoping children will come trick-or-treating. John Daleiden hadn’t planned to offer treats, but visitors came to his place in the Sonoran Desert in Phoenix, Arizona. Kanematsu was supposed to shell-out treats at the door, but he kept running out to the street.

A full moon--
going out to see it
one more time

Hemapriya Chellappan fought writer’s block in Pune, India. Meghan E. Jones got a helping hand while cramming for an exam in Calgary, Alberta.

Alan Summers borrowed a turn of phrase from British poet Henry Vaughan, “during an incredible rainstorm.”

is it raining
cats and dogs
night tremor

Feeling absolved in Guilford, Connecticut, Kat Lehmann wrote this line as soon as she awoke: forgiving the night each flower at sunrise.

Kanematsu awoke in a sweat, perched on the side of his bed. Aljosa Vukovic’s life has assumed a different rhythm in Sibenik, Croatia.

that rooster
not annoying me anymore
self-isolation

Hemapriya Chellappan heard a clever black-plumed African bird mimic the sounds of a meerkat: on a bare branch the drongo with its butterfly kill.

Kanematsu almost called the neighborhood police koban. Anne-Marie McHarg “watched nature in all her beauty come alive” in a London park. Daniela Misso stayed overnight to listen to a chilly lament from the assassinated Queen of Goths on the island of Martana on Lake Bolsena in Italy.

Cacophony
Of birds song
By the lake

Her cries
in the tramontane wind
deserted streets

morning fog
in the village cafe
the masks come off

Sally Fox took in the sparkling lights of the autumn skyline in San Francisco.

A first autumn night.
A mass of windows speckle,
The darkness, glowing.

Zelyko Funda suddenly frowned in Varazdin, Croatia. Murasaki Sagano followed the trail of a star over Tokyo. Jared Michael Kubokawa visited Matsuyama this fall, hoping, he said, “to stop in to offer the old poet a gift of appreciation--I know he loved them.” Master haikuist Masaoka Shiki was born in Matsuyama on Oct. 14, 1867, and according to the Ehime Culture Foundation was laid to rest at Dairyuji temple in Tokyo after his death on Sept. 19, 1902. Priscilla Lignori sent her respects from Montgomery, New York. Kanematsu misses him.

lighthouse
the trail of its light
reaches a graveyard

Autumn star
in a quirk of fate
R.I.P

Persimmons--
missing a haikuist
who loved them

Mario Massimo Zontini prayed for a loved one. At a graveyard in Parma, Italy, he was relentlessly pestered.

Roberta Beach Jacobson was able to pass a quiet moment of reflection in Indianola, Iowa. Anna Maria Domburg-Sancristoforo whispered in The Hague, Netherlands.

cemetery picnic
not a lot of
conversation

that little shadow
in the corner
why does it speak to me?

homecoming...
the lonely ghost of
my childhood