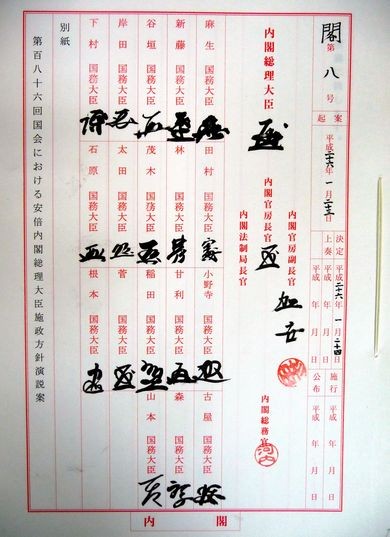 "Kao" stylized signatures are written with a brush by then Prime Minister Shinzo Abe and other ministers on a document approved at a Cabinet meeting in January 2014. (Asahi Shimbun file photo)

"Kao" is a kind of personalized hieroglyphic signature on official documents in Japan in lieu of a handwritten full-name signature.

Those used by Japanese prime ministers of the past brought out their personalities.

Shigeru Yoshida's kao featured the kanji for "Shigeru" in a boldly stylized design.

Nobusuke Kishi's seal reminds me of a UFO flying askew.

I began to think about kao after Taro Kono, the minister for administrative reform and regulatory reform, said last week: "Kao will continue to be used at Cabinet meetings."

Coming from Kono, who has been crusading against the traditional practice of stamping official documents with a "hanko" seal, I was taken aback as I had never expected him to protect this anachronistic practice.

According to "Kao wo Yomu" (Reading kao) by historian Shinichi Sato (1916-2017), the designs of many kao incorporate stylized cursive script.

The feudal Ashikaga and Tokugawa families used designs that were strikingly similar to those of their respective ancestors, presumably out of a desire to ride on their prestigious coattails.

Sixteenth-century warlord Oda Nobunaga used an especially artistic kao. It was said to be a stylized version of the kanji "Rin" from the mythological creature "Kirin" (Qilin in Chinese), which was believed to symbolize a perfectly governed world. The design packed quite a punch.

By "Sengoku Jidai" (age of warring states) protocol, kao were considered to be of "higher class" or more formal than "insho" seals. But the use of kao began to decline during the Edo Period (1603-1867) and was overtaken by insho during the Meiji Era (1868-1912) that followed.

But as the sole exception, kao are still used by Cabinet ministers today for signing official Cabinet documents. This practice is said to have continued since the establishment of the Cabinet system in 1885.

Wondering what designs are prevalent nowadays, I perused some recent Cabinet documents.

Fumio Kishida's was elegant and rather delicate.

Shigeru Ishiba's featured the kanji for "ishi" (stone), and it certainly looked hard and solid.

Next to Ishiba's was Prime Minister Yoshihide Suga's kao, which was twice as large as Ishiba's and the lines were bold and black. I wondered about how this seal represented Suga's philosophy.

I never get bored looking at the kao signatures of feudal warriors, court nobles and poets. I may even try to design my own on my next day off--not that I have any intention of going into politics.

Life-size Gundam finally up and moving in Yokohama Port