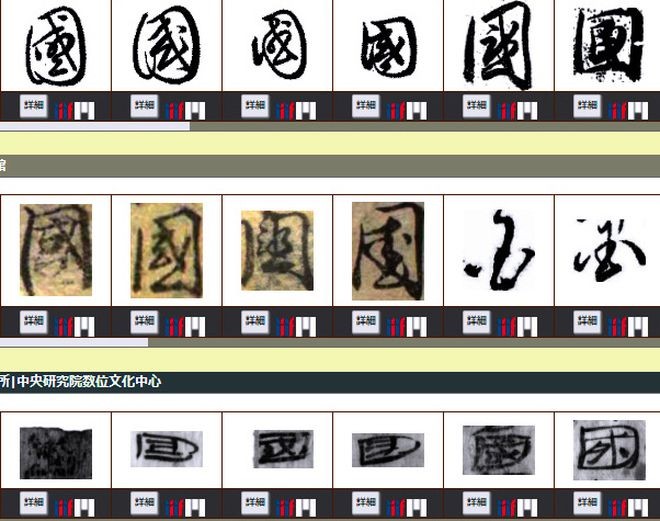 Some of the search results for the kanji “kuni” (state) on a newly released database site show many different characters with the same meaning. (Provided by the Nara National Research Institute for Cultural Properties)

Archaic forms of kanji that are difficult to decipher in the modern age are being compiled into an online image retrieval system so scholars and others can gain a better grasp of what people were writing about in bygone times.

Six research institutes were involved in developing the Multi-Database Search System for Historical Chinese Characters, the first of its kind that collates old kanji from various regions and periods in history.

More than 7,000 kanji found on pieces of wood unearthed at archaeological sites and elsewhere, along with historic documents can be accessed.

As the system is open to anyone, calligraphers and designers as well as researchers are expected to take advantage of it.

“We will work with more institutions to expand the program in the future,” said Hajime Baba, head of the historic material research division of the Nara National Research Institute for Cultural Properties, who was involved in developing the system. “I hope ordinary people will also make use of it.”

The Nara institute and the University of Tokyo’s Historiographical Institute played a leading role in the project.

Entering certain kanji on the site will simultaneously display variant and simplified characters written on ancient wooden tablets and documents as well as letters from the Earlier Han Dynasty collected by a Taiwanese research institution.

The Nara National Research Institute for Cultural Properties said it is the first time a search system has been built to cover databases of different research centers, making the site the largest kanji collection in kanji-based regions in East Asia.

The developers expect the system to be used for seismologic surveys as well as kanji studies because seismologists sometimes need to refer to documents dating to periods earlier than the Edo Period for their research.

Use of the integrated database may also contribute to the creation of new styles and pictographs in calligraphy and designing as well, according to the research centers’ representatives.

The kanji search site is available at (https://mojiportal.nabunken.go.jp/en/).