EDITORIAL: Strategy for an open Indo-Pacific should not raise regional tensions 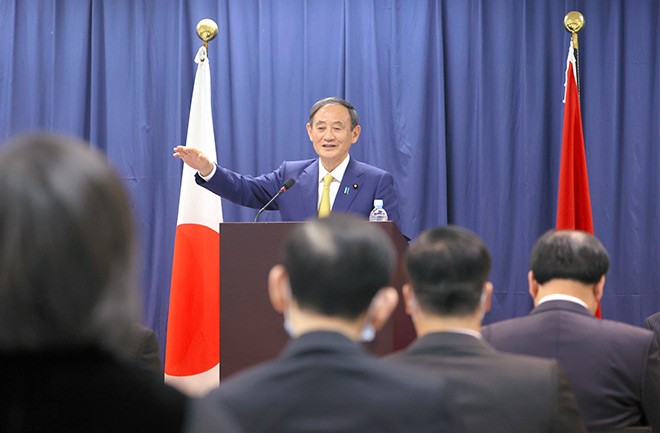 Prime Minister Yoshihide Suga speaks about working toward a free and open Indo-Pacific region at the Vietnam-Japan University in Hanoi on Oct. 19. (Pool)

The Free and Open Indo-Pacific (FOIP) initiative, a key vision for Japan’s foreign policy agenda, should not in any way create a division or raise military tensions in the region.

Japan should focus on promoting dialogue for peace through steady, if not high-profile diplomatic efforts.

In his first overseas trip since taking office, Prime Minister Yoshihide Suga recently visited Vietnam, which currently holds the rotating presidency of the Association of Southeast Asian Nations (ASEAN), and Indonesia, a leading power in the region. The two countries are regarded by the Suga administration as vital strategic partners in Tokyo’s efforts to promote the FOIP vision.

In an Oct. 21 news conference in Jakarta, Suga pointed to “moves that run counter to (the FOIP’s principles) in the South China Sea.”

“Japan is opposed to any actions that escalate tensions in the South China Sea,” he added. Suga also stressed these points in his policy speech delivered in Vietnam, which he visited before traveling to Indonesia.

In these remarks, Suga clearly referred to China’s behavior in the region without mentioning the country by name. China’s aggressive naval expansion is creating anxiety among many countries including Japan.

Key topics Suga discussed with the leaders of the two Southeast Asian nations include security issues as well as support for their efforts to contain the new coronavirus outbreaks, and economic cooperation.

Suga and his Vietnamese counterpart, Nguyen Xuan Phuc, reached a basic agreement on an accord that defines conditions for Japanese exports of defense equipment and national security technology to Vietnam. Suga agreed with Indonesian President Joko Widodo to hold bilateral meetings of foreign and defense ministers as soon as possible.

But neither Vietnam nor Indonesia want to have a serious confrontation with China. ASEAN is composed of countries with diverse political systems and cultures, with their stances toward China being far from unified.

If forced to choose between China and the United States in the intensifying battle for hegemony between the two giants, ASEAN could break into two groups.

Japan’s diplomatic strategy for the region should be aimed at supporting ASEAN’s own efforts to play the central role for regional stability and prosperity while maintaining its integrity.

During his first month or so in office, however, Suga has made a series of foreign policy moves to enhance Japan’s security cooperation with its partners that are clearly intended to counter China’s assertiveness.

Following the agreement among Japan, the United States, Australia and India to hold regular meetings of their foreign ministers under the so-called “Quad” framework, the Suga administration decided to allow the Self-Defense Forces to protect Australian Defense Force assets, including warships, under a provision of national security legislation.

It has also been decided that Australia will join the annual Malabar naval exercise involving Japan, the United States and India, starting this year.

All these moves, obviously aimed at pushing back against China, raise concerns that the Quad strategy could only intensify the confrontation with China if it acquires a strong military character.

In his Oct. 21 news conference, Suga also said, “Our response in the South China Sea is not aimed at any one country,” adding Tokyo has “absolutely no intention” to create an Indo-Pacific version of the North Atlantic Treaty Organization (NATO), an idea that incurs Beijing’s wrath.

In referring to territorial disputes in the South China Sea, Suga said, “Let me stress anew the importance of all the countries concerning the South China Sea issues not resorting to force or coercion but working toward peaceful resolutions of the disputes based on international law.”

Japan should remain strongly committed to the principle of “not resorting to force or coercion” in its efforts to realize the FOIP vision.