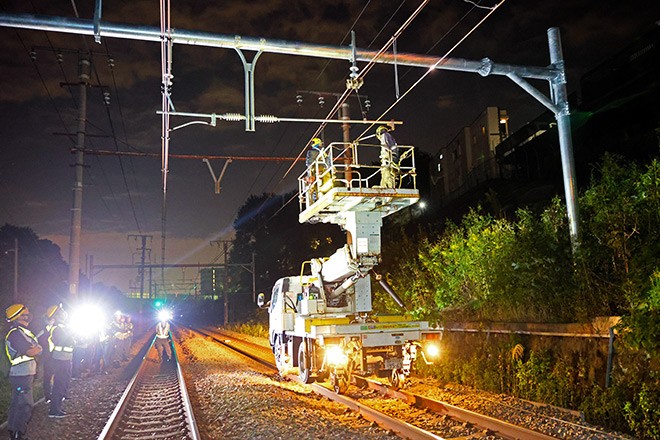 Work on tracks is conducted after midnight between Yokohama and Totsuka stations on the JR Tokaido Line on Oct. 13. (Tsubasa Setoguchi)

News of the change in East Japan Railway Co.’s last-train schedule for the Tokyo area drew groans from late-night workers, business operators and some staggeringly drunken commuters who may have to change their lifestyles.

“Drinking is a social thing to get along with people,” said a 25-year-old salesman who had attended an after-work drinking party in the Marunouchi district near Tokyo Station on Oct. 21. “It’s a shame that I will have to go home early (with the new schedule).”

He was waiting in line for a taxi at Ome Station, about 50 kilometers west of Tokyo Station, after falling asleep on a train and missing his stop.

JR East on Oct. 21 officially announced that the last trains on 17 lines that operate within a 100-kilometer zone centering around Tokyo Station will depart up to 37 minutes earlier next spring.

It will be the first across-the-board change for last trains in the history of JR East, which was established in 1987. The company said the earlier schedule was needed mainly because the novel coronavirus pandemic has caused a sharp decrease in the number of late-night passengers.

A 21-year-old female university student was told about the schedule change when she was waiting for her friends to go to a drinking party.

“What? That’s big news for us university students,” she said.

Her “circle” often holds parties in Tokyo’s Shinjuku area, and she uses the Chuo Line or Sobu Line to get to her home in Edogawa Ward on the eastern side of the capital. The last train currently leaves Shinjuku around 12:30 a.m.

“If the last train is moved up, I won’t be able to stick around to the end of ‘niji-kai’ (second-round drinking party),” she lamented.

The schedule change means the rush among partiers for the last train home will start earlier, and some businesses expect that will lead to a drop in revenue.

A 46-year-old manager of a “yakibuta” (braised pork) restaurant near Shinbashi Station, a popular drinking area in Minato Ward, said the new schedule could deal a blow to his business.

“Once the last train time is moved up, customers will go home early and we will lose sales,” he said.

The restaurant currently closes at midnight so staff members can catch their last trains.

“But we might have to close the restaurant 30 minutes early,” he said.

A 52-year-old man who works at a Shinjuku-area supermarket that closes at 11 p.m. gets home by using a train that departs Shinjuku Station at 12:15 a.m.

Under the new schedule, he will lose that means of going home.

“I will have to ask my boss for a shift change,” he said.

A 54-year-old woman who works at a printing company in Hachioji faces a similar problem. Once or twice a week, she has to work late and take the last train home.

“If the last train departs earlier, I won’t be able to finish my work,” she said. “I might have to go to work on holidays.”

JR East said the announced departure times for the last trains are tentative and will be fixed after adjustments are made with private railway companies.

Currently, some JR East lines operate until a little after 1:30 a.m. Under the new schedule, they are expected to arrive at the final station just after 1 a.m. at the latest.

The moved-up schedule will most affect the Takasaki Line from Ueno to Shin-Maebashi stations and the Ome Line from Tachikawa to Okutama stations.

Currently, the last train on the Takasaki Line leaves Ueno at 11:07 p.m. while the final train on the Ome Line departs from Tachikawa at 11:36 p.m.

Under the new schedule, the final departure times for both lines will be about 37 minutes earlier.

The last departure on the Keiyo Line from Tokyo to Soga will be moved up by about 30 minutes, and last-ride passengers heading to Takao on the Chuo Line’s rapid trains will have to get to Tokyo Station a half hour earlier.

JR East is expected to report a net loss of 418 billion yen ($3.9 billion) in the business year ending in March due to the substantial decrease in passenger numbers.

The company posted a net profit of 198.4 billion yen for the previous fiscal year.

The railway company said it expects to cut costs by more than 1 billion yen through the new schedule.

JR East will also push back the departure times for the first trains on five lines, including the Chuo Line’s local trains, by up to 17 minutes. And in December, the railway operator is expected to announce that it will move up the schedule for the last train leaving the suburbs for central Tokyo.

The company plans to use the extra nonoperating time for maintenance and inspection of trains and related equipment while improving efficiency and working practices.

At least one person welcomed the new schedule.

A 37-year-old executive board member of a capsule hotel chain said the business saw a 90 percent drop in customers in spring because of the pandemic.

“I expect a certain number of people will still stay (in Tokyo) after the last train leaves,” he said. “I hope more people come to (our) hotel (after the change),” he said.