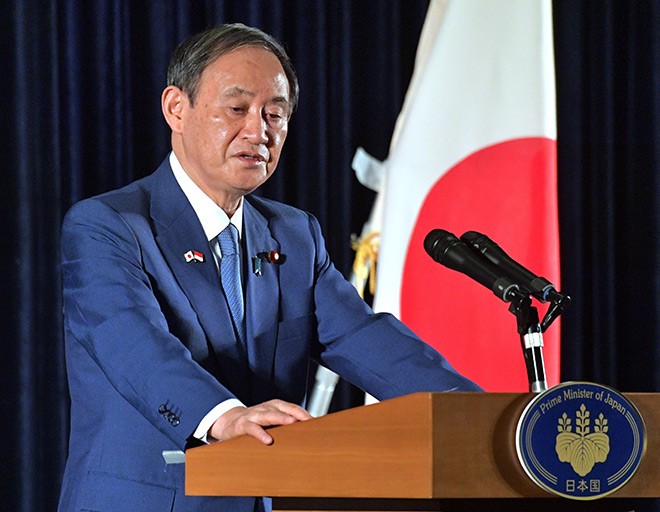 Prime Minister Yoshihide Suga refrained from mentioning China when he pushed for a free and open Indo-Pacific region, but Beijing still criticized the Japanese leader in his first official overseas trip.

Some political watchers had expected Suga to emphasize improving business ties with China to ease the constant friction between the two countries.

However, his visit to Vietnam and Indonesia, two major ASEAN members, clearly showed he intends to carry on the free and open Indo-Pacific objective of his predecessor, Shinzo Abe, despite Beijing’s objections.

China’s state-run Xinhua News Agency transmitted a report on Oct. 18 that described the Indo-Pacific objective as “a strategy meant to walk in step with the United States and deepen confrontation in the region.”

It also said of Suga’s first overseas visit, “It was an attempt to bring the ASEAN members into the Indo-Pacific framework being pushed by the United States and Japan.”

At his Oct. 21 news conference in Jakarta, Suga said the free and open Indo-Pacific concept “was not aimed at any specific nation.”

However, China has already made clear that it feels targeted by the concept.

In Tokyo on Oct. 6, the foreign ministers of Japan, the United States, Australia and India reached an agreement to expand the range covered by a free and open Indo-Pacific framework.

He called on ASEAN members to distance themselves from the free and open Indo-Pacific concept because “it would damage the framework for regional cooperation.”

A Japanese researcher at a Chinese university said Beijing’s concerns about Japan’s intentions may be unfounded.

“China is an important partner for the Japanese economy,” the researcher said. “Japan is not totally in sync with the United States that has been openly confrontational.”

U.S.-China ties have indeed unraveled this year. And Chinese officials believe no change will occur in the confrontation with the United States regardless of who wins the U.S. presidential election next month.

Beijing will seek to maintain stable ties with Japan and likely strive to gain a better grasp of where Suga’s diplomacy is headed by, for example, scheduling an early visit to Japan by Wang.

But if the Suga administration continues to press for closer economic and defense cooperation to establish a free and open Indo-Pacific region, Tokyo would inevitably become caught up in the confrontation between Washington and Beijing.

Suga added at his news conference that he had reached agreement with the leaders of Vietnam and Indonesia to push forward specific cooperation toward peace and prosperity in the Indo-Pacific region.

“Having Japan and ASEAN heighten mutual cooperation will not only lead to economic prosperity in the region but will also serve as the foundation for a free and open Indo-Pacific,” Suga said.

But although he did not name China, Suga also said there were moves in the region that went against such an objective.

(This article was compiled from reports by Masayuki Takada in Beijing, Tomoyuki Izawa in Jakarta and Ryutaro Abe and Hideki Kitami in Tokyo.)