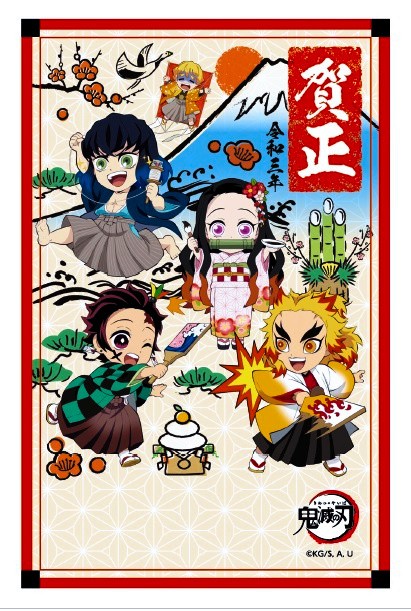 "Demon Slayer" fans can share their passion and hopefully a dose of good luck by sending out 2021 New Year's postcards by Japan Post Co. that feature their favorite anime characters.

Japan Post announced on Dec. 21 that it will sell the cards themed on characters from the wildly popular “Demon Slayer: Kimetsu no Yaiba,” which come with numbers for a nationwide lottery for prizes.

Major post offices across the nation will start offering the cards on Nov. 20.

There will be four designs available. One set, which includes three cards of the same design, costs 660 yen ($6.30), including tax.

Sets of five 84-yen stamps and five postcards, as well as passbook cases, keyholders and Post-it sets, all with the anime designs, will also be sold.

Orders for the "Demon Slayer" New Year’s postcards can also be made online from Oct. 29, with orders for the other anime goods being accepted from Nov. 20. Shipping is extra.