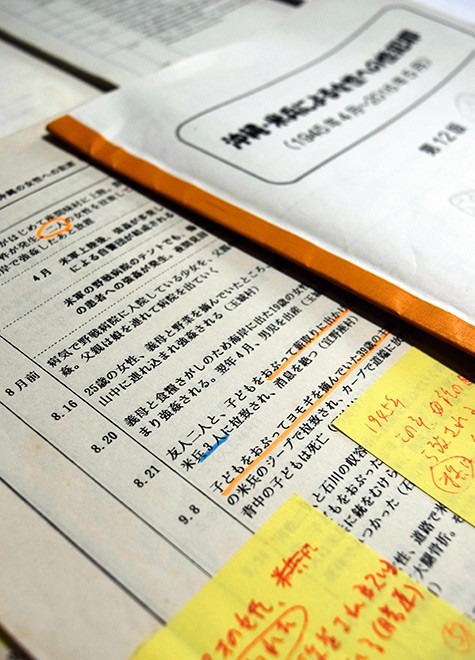 NAHA--Harumi Miyagi was stunned when she learned an Okinawan infant was raped by a U.S. serviceman.

Only 9 months old when she was assaulted in September 1949, she was the youngest victim, according to a booklet that documents cases of sexual violence committed by U.S. troops.

Miyagi, 70, a researcher of the history of Okinawan women, helped compile it. She said she has been unable to put the horrific incident out of her mind since she began collecting the accounts and records 25 years ago.

Miyagi was born in the year of the assault.

“It could have been me,” she said.

Then, two years ago, Miyagi learned by chance when she was interviewing locals that the baby girl died shortly after the attack.

She could not find a word to describe her shock.

Miyagi and members of a citizens’ group in Naha are working on an update to the booklet, titled “Postwar U.S. Military Crimes Against Women in Okinawa.” It is a task they hope they do not have to repeat.

Okinawan girls and women fell victim to sexual violence even before the Battle of Okinawa ended in June 1945.

One entry documents a woman being abducted in April 1945 when she was evacuating with others. This was quoted from a local town’s official account of history.

Another entry quotes an account from a witness that a victim, who had two children, was raped when she was washing laundry at a well near her home in 1946. She later gave a birth to a baby boy.

The small book documents cases from the U.S. military’s rule of Okinawa and then after the southernmost prefecture was returned to Japan in 1972.

One official record revealed that a 27-year-old woman on her way home one day was pushed into a ditch and raped by four men on Sept. 2, 1951.

The booklet also quoted a newspaper report that two female junior high school students who went bathing in the sea were raped after they were knocked unconscious with a stone on April 19, 1975.

In another entry, a high school student returning home from school was raped in a park in October 1984, based on an account by a witness.

The 350 cases include those where the victims had no access to a fair trial because Okinawa was under the U.S. military’s control at the time. They also include sexual assaults not pursued as criminal cases and attacks where victims came forward years later to report their grisly experiences.

The civic group, which calls itself Okinawan Women Act Against Military Violence, compiled the booklet to document sexual assault cases involving U.S. troops to draw public attention to the issue. Based in Naha, it was founded in the immediate wake of the September 1995 rape of an elementary schoolgirl by three U.S. servicemen.

The incident sparked outrage in Okinawa Prefecture and elsewhere in Japan, leading to one of the largest rallies ever in the prefecture against the U.S. military. An estimated 85,000 people gathered in a park in Ginowan on Oct. 21, 1995, in protest.

It shed light on sex crimes committed by members of the U.S. military, a problem not embedded into the collective consciousness until then--despite the suffering of many Okinawan women over the decades.

The group’s co-chair, Suzuyo Takazato, 80, said she felt a strong need to assemble records for when reporters in and out of Japan invariably asked her about the scope of the problem.

Only a fraction of sex crime cases come to surface. Takazato had worked as a counselor for victims of sexual assault. She knew that many local girls and women remain silent about their suffering, due in part to the stigma associated with rape.

Her group produced a seven-page booklet in February 1996 by gathering newspaper articles.

After seeing a copy of the booklet, a local woman called the group to share her experiences. The group added her case in the next edition.

Group members scoured all the available records, ranging from the U.S. government’s official documents and official records kept by the government of Ryukyu Islands under U.S. military rule, to books on the history of each municipality.

Takazato and her colleagues believe many sexual assault cases in Okinawa Prefecture are a result of the prefecture being forced to shoulder a disproportionate burden--70 percent--of the U.S. military bases stationed in Japan.

While they want the information to generate broader public awareness, they were also afraid that making copies available to the public could lead to the information being used out of context and could unknowingly end up hurting victims again.

So the group limited its sale to one venue for a gathering.

After the high-profile 1995 case, sex crimes continued to occur in Okinawa Prefecture, forcing Takazato’s group to keep updating the booklet.

On June 29, 2001, a woman in her 20s on her way home was raped in a parking lot. A female junior high school student was assaulted on Feb. 10, 2008, but she dropped the complaint. A female company employee was raped and murdered by a former member of the U.S. military on April 28, 2016.

Takazato and Miyagi hope publishing the information will make sex crimes associated with the U.S. military more known to the public.

“Violence against women is the most serious problem manifesting under the Japan-U.S. Security Treaty,” Miyagi said. “But victims tend to remain silent due to the nature of crime. And Okinawa, where U.S. bases are concentrated, is far from Japan’s main islands. Together, these factors make it difficult for people to realize the gravity of the problem.”