VOX POPULI: Oxford English Dictionary was born from a bond of friendship 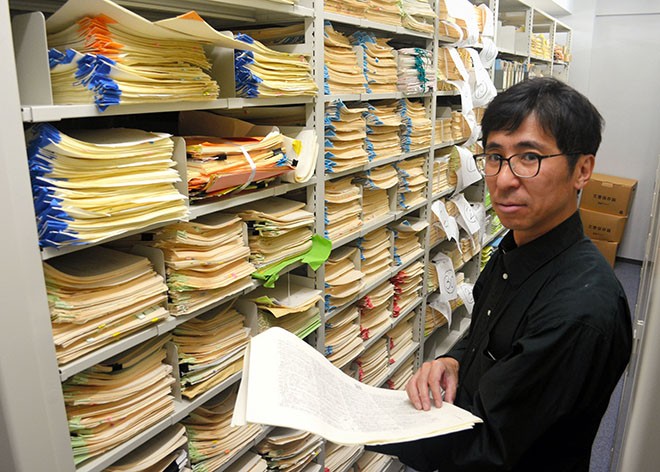 Proof copies of the successive editions of Kojien, an authoritative Japanese dictionary first published in 1955, are kept at Iwanami Shoten Publishers. The seventh edition was released in 2018. (Asahi Shimbun file photo)

A film, seen without knowing any background information about it, can sometimes captivate you with its unexpected content.

For me, one recent example is the 2019 biographical drama “The Professor and the Madman,” which is currently showing at theaters in Japan.

The film shows a bond of friendship born in the 19th century between a murderer and the editor of what would become the esteemed Oxford English Dictionary.

“The episode is little known, perhaps except among researchers of English dictionaries,” noted Nagayuki Inoue, 60, a professor at Hiroshima University.

William Chester Minor, a U.S. military surgeon who suffered from mental illness due to his experiences during the Civil War, fatally shoots a man in Britain. While being held at a psychiatric hospital, he hears about a historic dictionary editing project.

Deeply interested, he starts compiling copious examples of word usage and keeps sending them to the editorial board headed by professor James Murray.

A mind-boggling undertaking, the OED project entails research of the origin of words, their evolution through the years and eventual obsolescence.

Searching for examples of usage in the classics and great books was particularly challenging.

It took 70 years for the first 10-volume edition to be published in 1928. Murray never lived to see that day.

“Using the human body as an analogy, the definition of a word is the heart, and examples of its usage are the blood,” said Inoue. “The more abundant the examples, the more alive the dictionary.”

It took him six and a half years to edit an English-Japanese dictionary, he said.

I recall a scene from Shion Miura’s novel “Fune wo Amu” (The Great Passage), where a linguist who dies while editing a dictionary leaves a letter that says to the effect, “If there is an afterlife, I will compile usage examples after I get there.”

As a journalist, I am so preoccupied with chasing daily news that I have never experienced the pleasure of working for decades on just one task.

The film has taught me that it is possible to devote one’s soul to a job even if one will never live to complete it.