Typhoon-hit golf course where Aoki got start back in business 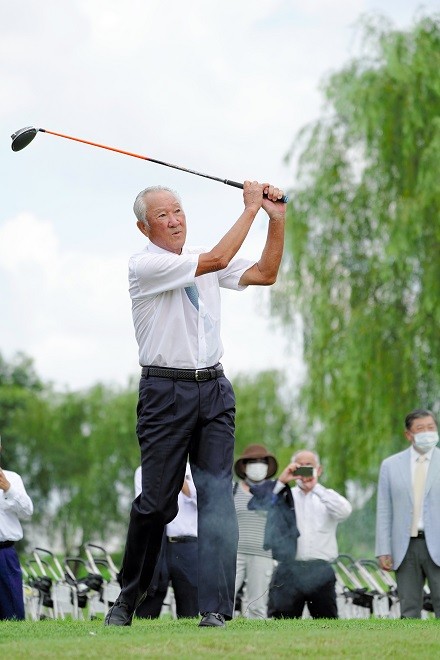 Hall of Fame golfer Isao Aoki grew sad and nostalgic when he heard that the Tokyo golf course that gave him his start had been ravaged by a typhoon and faced almost certain closure.

“I thought the place that raised me would come to an end, when I learned the course’s operator decided to close its doors,” Aoki, 78, said of Shin Tokyo Tomin Golf Jo (New Tokyo resident golf course) in the capital’s Adachi Ward.

Aoki started working as a caddie at Japan's first riverside golf course in the spring immediately after he graduated from junior high school.

“I began my golf career there 63 years ago,” Aoki recalled.

In October last year, powerful Typhoon No. 19 raised the water level in the Arakawa river by more than 7 meters, fully submerging a willow tree on the course. A huge volume of earth, sand and sludge remained at the 120,000-square-meter site.

The floodwaters did not recede because prolonged land subsidence made the entire course depressed. For that reason, the links’ operator determined it would be impossible to resume operations and decided to shut down the course at the end of October 2019.

However, an unlikely savior came forward. It was Aoikai Group, which runs medical centers and schools.

The company argued that "the first riverside golf course must not be closed” and “it is unacceptable for us to do nothing to help the links to survive.”

Aoikai Group took over the business, and invested hundreds of millions of yen to remove earth and sand with heavy machinery and to replace the grass on the greens, starting from the spring.

“I did not even imagine I would be able to see green grass on the course again,” said Nikaido. “I thought the site would be covered with weeds and then turn into ruins.”

Situated in the lowest reaches of the Arakawa river, Shin Tokyo Tomin Golf Jo started in operation in April 1955 and is known as the first links course of its kind. During its peak period, it had no less than 36 holes on both sides of the river.

Even after the number of holes was reduced to nine on the right bank due to a riverside redevelopment project and other reasons, the short course was long loved by people owing to its proximity from central Tokyo.

The course caters to recreational golfers as the reasonable green fees start from 3,750 yen ($35.82) after tax on weekdays.

Many golfers are thought to have played for the first time there.

AOKI RETURNS BACK TO WHERE HE STARTED

From his humble beginning as a caddie at Shin Tokyo Tomin Golf Jo, Aoki went onto a storied career that saw him the top money leader on the Japanese men's professional golf tour five times.

He became the first Japanese to win a U.S. PGA Tour event in 1983 at the Hawaiian Open and was inducted into the World Golf Hall of Fame in 2004.

At a ceremony to mark the facility’s reopening on Aug. 1,  Aoki hit the ceremonial first tee shot.

“The current course reminds me of what it looked like while I was working as a caddie there,” said Aoki. “The thin willows growing so tall made me feel nostalgic.”

Although refurbishment work continues at various areas along the course, Aoki promised to “revisit it following the end of the rebuilding project.”

"I want to play golf again at the course where I started my career," he said.

Many inquiries are currently pouring in from those who “want to know whether the course is open today,” and staff of Shin Tokyo Tomin Golf Jo pleasantly reply, saying, “Yes, the course has been revived.”