Shibuya urges Halloween partyers to have their fun online 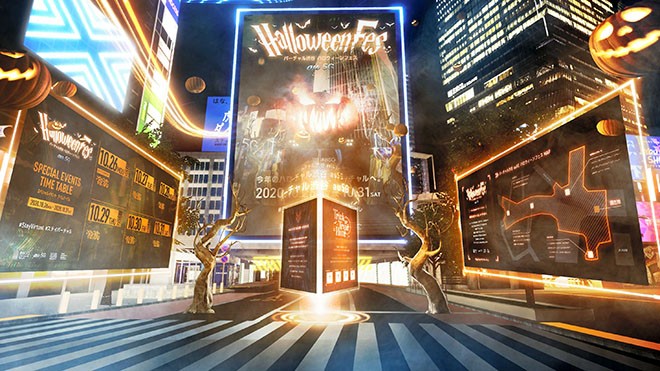 An image of “Virtual Shibuya,” an online event for Halloween

Officials of Tokyo’s Shibuya Ward are begging people not to come to the capital’s party hub on Halloween this year and instead do their usual partying virtually, over concerns about crowds amid the pandemic.

“Please don’t visit Shibuya for the purpose of Halloween,” Ken Hasebe, the ward mayor, said at a news conference on Oct. 22.

Instead, he asked young people, who in past years have packed Shibuya streets while dressed in costumes and partied all night, to attend the ward-sponsored online Halloween events.

In recent years, many rowdy party-goers consumed alcohol in the area surrounding Shibuya Station and then raised hell by playing music at full blast, trashing city streets and vandalizing property.

The ward office responded last year by banning drinking in parks and on streets near the station at Halloween.

Hasebe said the problem is not only caused by certain troublemakers, but also by spectators who gather in Shibuya to see people’s over-the-top costumes.

“Their bad manners are a problem, too,” he said.

But activities such as enjoying food and drinks inside a restaurant, while keeping a safe distance from one another, are no problem, he said.

“It doesn’t mean that I don’t want anybody to come to Shibuya at all,” he added.

The ward office will reduce its alert level by limiting the deployment of security guards to only on Oct. 31.

It will no longer set up temporary portable toilets and change spaces in the area.

And it will not close the roads around the famed Shibuya scramble crossing to vehicle traffic.

At the same time, the ward office is encouraging people to participate in the Halloween-related online events it is sponsoring, which start on Oct. 26 and continue until Oct. 31.

Entertainers such as Kyary Pamyu Pamyu will appear in free streaming programs on the ward-sponsored online platform called “Virtual Shibuya.”

There will also be an online costume contest.