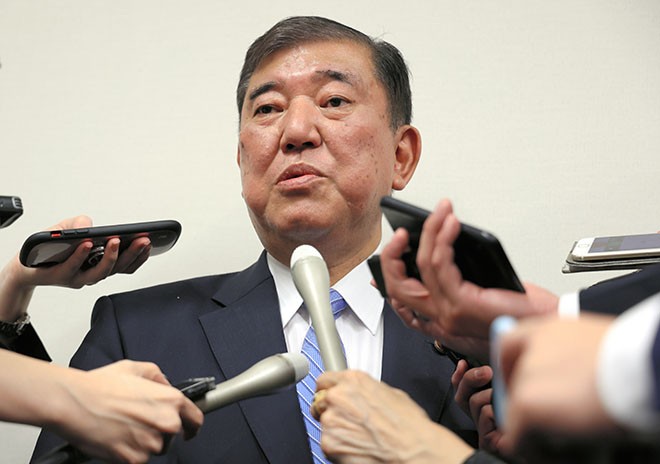 Shigeru Ishiba, former secretary-general of the ruling Liberal Democratic Party, answers questions in Tokyo after announcing his decision to step down as faction leader on Oct. 22. (Shiro Nishihata)

Veteran politician Shigeru Ishiba said he will step down as head of his faction in the ruling Liberal Democratic Party, a move that will damage his long-held hopes of becoming prime minister.

Ishiba, 63, announced his decision at an emergency meeting of his faction on Oct. 22, citing his disastrous showing in the last LDP presidential race won by current Prime Minister Yoshihide Suga.

“I have put an enormous burden on my allies and supporters” for running in the race, he said. “I could not meet many people’s expectations. I decided that I should take responsibility for the failure.”

He said he will remain in the faction, which has 18 other members.

Some faction members expressed shock at Ishiba’s decision. But others said they got the impression that he was merely following a scenario that has been in place for a while.

The departure of Ishiba, a vocal critic of the previous Abe administration, is seen as an attempt to tone down the faction’s “anti-LDP mainstream” label and set the stage for cooperation with the Suga administration.

The faction has not set a schedule to pick its next leader.

On a news program aired by Fuji Television Network Inc. the same day, Ishiba denied that he has given up his ambitions of becoming prime minister.

But the former LDP secretary-general declined to comment on his future path, saying it was premature to say anything because the Suga administration has just been formed.

It was Ishiba’s fourth attempt to become LDP president, a position that has almost always guaranteed the post of prime minister because of the party’s persistent dominance in the Diet.

Ishiba, a former defense chief who is well versed in security issues and has crisscrossed the country to hear the opinions of rank-and-file party members, has been long popular with the LDP’s local chapters.

And he has consistently led public opinion polls as the most preferable candidate to head the party.

But support for his presidential bid remained low among LDP lawmakers due in part to his criticism of the Abe administration.

As soon as Suga, a key player in the Abe government, announced his candidacy in the election last month, major party factions scrambled to rally behind him.

Given Suga’s expected easy victory, some Ishiba faction members cautioned him against entering the race to keep his political fortunes alive.

But he ran in the race, and he received only 26 votes cast by LDP legislators, compared with 288 for Suga and 79 for Kishida.

That dismal showing prompted some faction members to doubt Ishiba’s sense of judgment.

Others feared that belonging to the Ishiba faction would lead to their continued marginalization in the party headed by Suga.

(This story was compiled from reports by Naoki Matsuyama and Junichiro Ishii.)