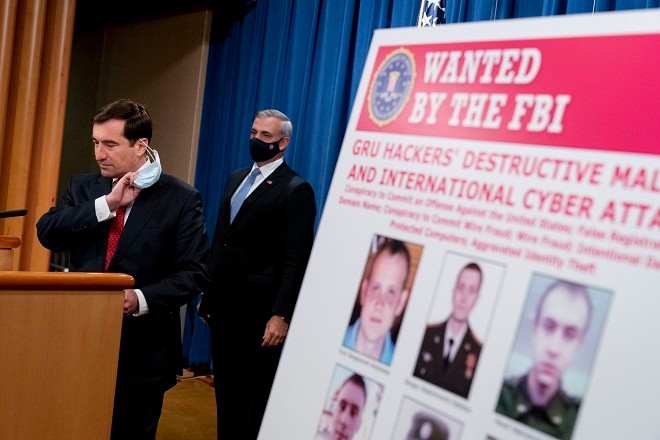 A poster showing six wanted Russian military intelligence officers is displayed as John Demers, U.S. assistant attorney general for the National Security Division, left, takes the podium to speak at a news conference at the Department of Justice on Oct. 19, 2020, in Washington. Also pictured is U.S. Attorney for the Western District of Pennsylvania Scott Brady. (AP Photo)

The 2020 Tokyo Olympics and Paralympics, a celebration of peace, were apparently targeted for malicious cyber activity.

Allegations have emerged that Russian military intelligence conducted cyberattacks on the Olympics and Paralympics in Tokyo, which were originally scheduled to be held this past summer but postponed to next year due to the new coronavirus pandemic.

Moscow has denied the allegation. However, the Russian intelligence agency in question is believed to have been involved in a wide range of international crimes in recent years.

Moscow’s responses to such serious allegations do not qualify as an act of good faith. It should display a greater commitment to its responsibility to offer a detailed explanation in light of the gravity of the accusations raised by the international community.

According to Britain’s Foreign Office, the cyberattacks against Tokyo Games organizers, related organizations and those involved in the sports extravaganza were orchestrated by the Russian Main Intelligence Directorate (GRU) military intelligence agency.

The U.S. Justice Department prosecuted six members of the unit, accusing them of playing key roles in cyberattacks on various targets, including the 2018 Winter Olympics held in Pyeongchang, South Korea, and the French presidential election in 2017.

The agency’s motive for targeting the Olympics is unclear. But some observers say the attacks reflect the Kremlin’s anger about the blanket ban on Russia from the world’s top sporting events for four years, including the Tokyo Games, because of persistent state-sponsored doping offenses.

With regard to doping allegations against Russia, investigations by the World Anti-Doping Agency and other bodies have discovered malicious operations by Russian agents.

During the 2014 Winter Olympics in Sochi, Russian anti-doping experts and members of the FSB, the Russian intelligence service and the main successor agency to the Soviet KGB, surreptitiously replaced urine samples from Russian athletes that were tainted by performance-enhancing drugs with clean urine collected months earlier to ensure they passed the doping tests.

U.S. and British investigations also uncovered the GRU’s involvements in operations to influence the U.S. presidential election in 2016 and in the poisoning of a former Russian spy in Britain in 2018.

Despite the growing mass of reliable testimonies and evidence pointing to Russia’s malicious cyber activities, the Russian government has only repeated that these allegations are false propaganda perpetrated by the West. Moscow’s response is hardly a convincing demonstration of its good faith to the international community.

With its governing system lacking democratic transparency,  it appears, the country’s intelligence agencies can get away with almost any acts without worrying about liability or accountability.

But Russia is far from alone in posing threats to the safety of cyberspace.

This year, it has been revealed that the huge cyberattack by Chinese hacker groups last year against Mitsubishi Electric Corp. likely leaked information related to one of the most advanced weapons being developed.

The U.S. government has for years accused China of illegal cyber operations. But leaks by Edward Snowden, a former contractor for the CIA, have disclosed the U.S. intelligence operation of a global network for Internet and phone surveillance.

Unfortunately, the world is likely to continue to lack any effective means to deal with international cyberattacks and information warfare, at least for now.

But any country or organization that has been found to be involved in such activities should be held accountable to the international community.

No organization, be it a government, an Olympics organization or a business entity, can be free from cyber risks. Every organization needs to confront this reality and take steps to enhance its guard against malicious cyber actors.