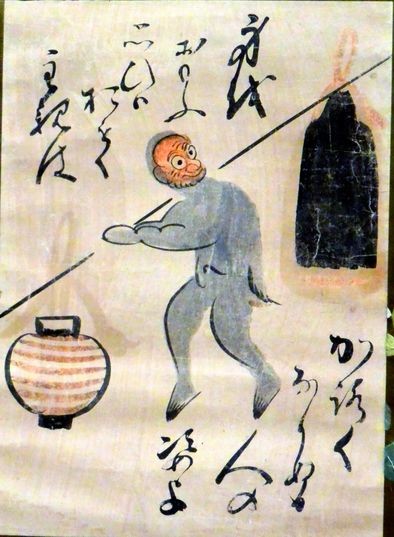 One story in “Uji Shui Monogatari,” an anonymous collection of tales compiled during the Kamakura Period (1185-1333), is believed to be the original version of the folktale “Kobutori Jiisan” (The old man who lost his wen).

A modern translation of the story by writer Ko Machida is written in a bouncy, contemporary style.

The carousing “oni” goblins, as seen by the old man with a cyst on one of his cheeks, “had skins of various colors.”

“Some demons had bright red skin, while others were bright blue. There were demons with dark pink skin as well.”

After the old man entertained the oni with song and dance, these fearsome ogres said to him, “Be sure to join us the next time, too.”

The creatures decided to keep something the old man had, as a token of his promise to entertain them again. “I guess, we go for the wen, eh?”

Has Machida gone too far in his attempt to translate the story into a contemporary style? Or perhaps he has done a good job of conveying the humorous spirit of the story.

I recently saw paintings that reminded me of the writing style Machida used in the translation. They were “otsu-e” pictures, currently being exhibited at Tokyo Station Gallery.

Otsu-e are humorous folk pictures sold in a post town where travelers could rest in what is now Shiga Prefecture as souvenirs during the Edo Period (1603-1867). The favorite themes for otsu-e included oni as well as human figures and animals.

“Oni no Nenbutsu” (a goblin praying to Buddha) shows a goblin with bulging eyes, walking while dressed as a Buddhist priest. It satirizes people who pray to Buddha even though they have no mercy in their hearts. It is said that “Oni no Gyozui” (a goblin bathing) is satire that delivers the moral point that you can wash dirt off your body but not off your mind.

These pictures, marked by curvy lines and vivid colors, were painted by obscure craftsmen. They were very popular in their day and were used to teach moral lessons to children or used as talismans.

"Choju-jinbutsu-giga” (literally caricatures of animals and humans), or "Choju-giga" for short, is frequently cited as the origin of Japanese manga. But otsu-e pictures are certainly part of that artistic tradition.

So it is hardly surprising that demons are the key characters in a manga series that has recently captured the nation’s imagination. Let us take time to reflect on the history of Japanese popular culture.