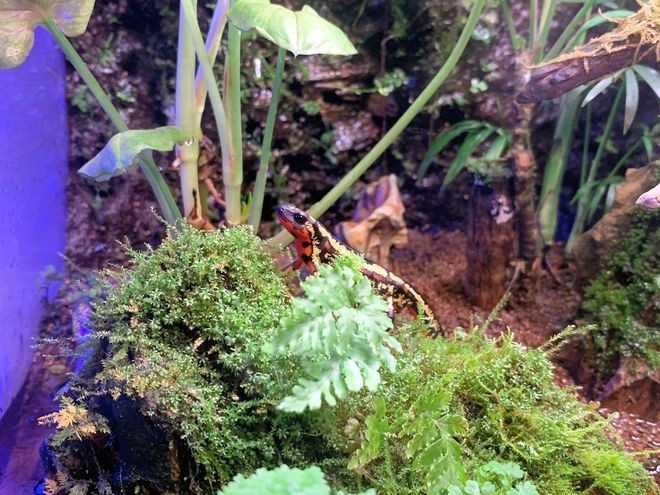 A newt is kept in a tank decorated with moss and aquatic plants. (Provided by a source)

Online sales of newts, including a near-threatened species, have skyrocketed in Japan, raising concerns about overhunting and potential ecological damage, according to an environmental activist and researcher.

More than 20,000 online transactions involving newts were carried out over the 11 years through last year. The amphibians are easily found in ponds and rivers across the country, and more people are keeping them in tanks at home.

Shigeharu Terui, who is involved in the preservation and research of salamanders and other animals, is urging the public not to causally buy newts through online auction sites.

“Awareness of the issue needs to increase among consumers, and measures should be taken against websites trading in living creatures,” Terui said. “Legislation may have to be introduced to stop the move as well.”

Terui, who said there is deep-rooted criticism against agents who sell amphibians and other animals online, strongly urges people to carefully take care of the newts to the end if they do buy them.

The 2018-2019 period saw a surge in internet searches using the word “imorium,” a combination of “imori” (newt) and “aquarium,” referring to the practice of keeping the species at home, according to Terui.

The sword tail newt is categorized as a near-threatened species on the Environment Ministry’s Red List.

Although the fire belly newt is not in danger of going extinct nationwide, it is included in the most endangered group on Chiba Prefecture’s red list.

According to Terui’s survey, 2,423 fire belly newts on the auction site were from Chiba Prefecture, the largest number among Tokyo and 31 prefectures where the amphibians were taken.

The huge number of transactions on the internet is believed to have fueled the excessive capture of newts. Species caught in one area and taken to a different location could escape or be released, resulting in negative effects on the local ecosystem.