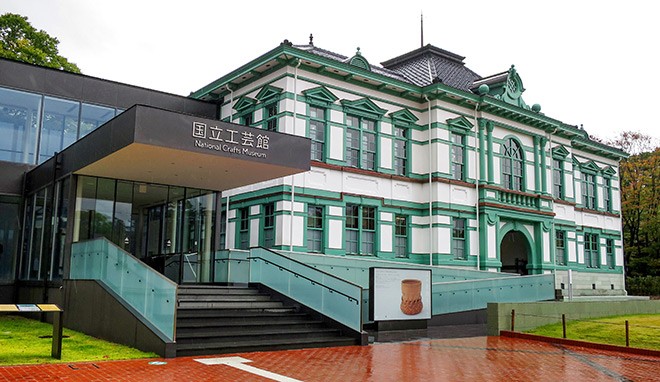 KANAZAWA--With an assist from soccer great Hidetoshi Nakata, the National Crafts Museum settled into its new home and opened to the public here on Oct. 25, after relocating from Tokyo.

“I have visited centers producing craftworks across Japan for the last decade and communicated with crafts artists,” he said. “The relationship between crafts artists and consumers has been weakening, so the museum has roles to strengthen their bonds.”

The museum specializes in ceramics, glass works, dyed textiles and other artistic craftworks from the modern era, giving visitors a look at Japan's finest crafts.

It relocated to Kanazawa, the capital of Ishikawa Prefecture, as part of the government’s regional revitalization efforts by transferring government institutions out of the capital and is the first national museum to be located on the Sea of Japan side.

The museum will start to disseminate information on crafts culture in the Hokuriku region, including Ishikawa Prefecture. The curator of the museum and seven other staffers will move from Tokyo to the new location by next spring.

The National Crafts Museum of the National Museum of Modern Art in Tokyo opened near the Imperial Palace in 1977. It has collected a widespread representation of crafts and design works from the Meiji Era (1868-1912) to the present, as well as works of living national treasures.

The museum will transfer about 1,900 works to its new location, out of 3,900 works of crafts and designs in its possession created in and after the Meiji Era.

The pieces include many works representing the craft world in Japan, such as the copper ornament “Twelve Hawks” by metal artist Chokichi Suzuki (1848-1919), which was exhibited at the World's Columbian Exposition in 1893 in Chicago. Another precious piece is the “Ornamental octagonal box, fern pattern, overglaze enamels, gold and silver” by renowned modern ceramic artist Kenkichi Tomimoto (1886-1963).

They were shown to the public at an exhibition celebrating the opening of the museum. Other works will be kept in Tokyo.

The administration of former Prime Minister Shinzo Abe sought to transfer government-related entities out of Tokyo and to local areas.

But the effort made little headway as just a portion of the Consumer Affairs Agency was transferred to Tokushima city, and only the Cultural Affairs Agency is planning to relocate to Kyoto in fiscal 2022, later than initially scheduled.