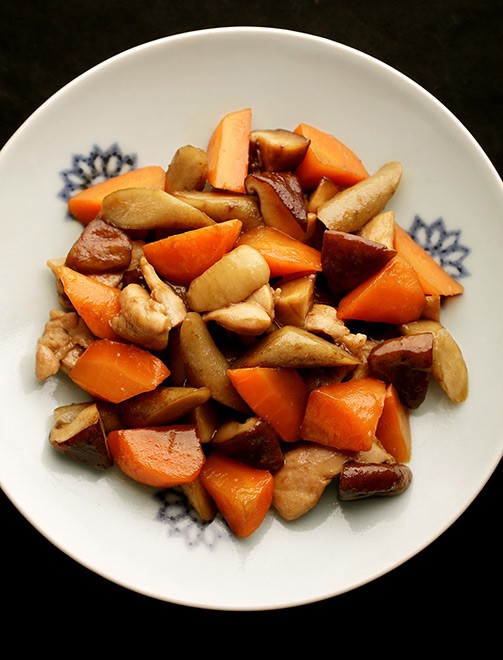 This week, we’re kicking off a new four-part series focusing on simmered dishes, which can be tricky to make without having them turn out watery or having the ingredients fall apart in the pot.

“When cooking simmered dishes, it’s important to match the timing of when the ingredients reach the right softness and when the simmering liquid has boiled down moderately and it tastes just right,” says Akiko Watanabe, who supervised the cooking aspect of this week’s recipe for “chikuzen-ni.”

Chikuzen-ni, a dish of simmered chicken and root vegetables, is a local specialty of Fukuoka Prefecture that has become popular nationwide.

It is cooked so almost no simmering liquid remains and ingredients become coated with a glaze.

When the ingredients have softened, the simmering liquid is reduced swiftly over high heat. Since carrots and burdock root are less likely to crumble through cooking, don't hesitate to boil the dish down.

To give the chicken a crispy surface, we're going to pan-fry it first. In the finishing stage, the roasted flavor enhances the tastiness.

Likewise, the vegetables are first sauteed to transfer the richness of the oil to them.

“The dish also turns out tasty if you add lotus root and ‘satoimo’ yam,” Watanabe says.

The arranged version introduces a dish called “kaminari konnyaku,” literally “thunder konjac,” whose name is due to the noisy sizzling sound it makes when sauteed in the pan. The simmering liquid is also reduced to achieve a savory finish. Since a bit of chili goes a long way, use in moderation.

Burdock roots are often sold with mud still caked on them. When storing them, you should wrap them in newspaper with the mud still on and keep them in a cool, dark place.

“As they dry out, they lose their savory 'umami' flavor and aroma," says journalist Kuniko Shinohara, who specializes in vegetables and coauthored a volume of the “Yasai no Benricho” (Handy guide to vegetables) series on locally grown traditional vegetables from around Japan.

"A key to keeping them fresh longer is to simulate the environment they were grown in.”

If you buy pre-rinsed burdock roots or rinse them before storing, cover them in plastic wrap to slow the drying process and keep them in the vegetable compartment of the fridge.

“It's handy to shave them in ‘sasagaki’ style, stir-fry briefly and then store them in the freezer,” Shinohara says.

In sasagaki style, thin and long vegetables are cut from one end as if shaving a pencil into thin diagonal strips resembling “sasa” bamboo leaves.

1. Cut chicken into cubes 2 to 3 cm on the side and mix with sake. Peel carrot, cut into four pieces lengthwise, and chop each piece randomly. Scrape skin off burdock root, chop into random pieces and immerse in water. Drain in sieve. Cut stem off shiitake, cut radially into six pieces. Cut off hard end of stem and slice in two lengthwise.

2. Heat 1/2 tsp oil in frying pan, cook surface of chicken over medium heat and remove from pan (PHOTO A).

4. Add dashi stock (PHOTO B), cover with lid and simmer over low heat for 10 minutes. Add sugar, soy sauce and cook over low heat for another 5 minutes. When vegetables become tender, remove lid and boil down liquid over high heat while mixing (PHOTO C).

Akiko Watanabe is a cooking expert specializing in Japanese cuisine. Midori Kasai is a professor at Ochanomizu University and chairwoman of the Japan Society of Cookery Science.

Make lattice-like incisions on both sides of a block of konjac. Cut into cubes 2 cm on the side, boil for 2 minutes and drain in a sieve. Immerse 1/3 pod chili in water to reconstitute and cut into rounds. Heat 1 tsp oil in pot, stir-fry konjac and coat pieces with oil. Add 50 ml dashi stock, 1 tsp sugar, 1 and 1/2 Tbsp soy sauce and simmer over low heat for 5 minutes. Add chili, heat over medium heat while mixing occasionally until liquid is gone.

What are some different ways we can use sugar and sweet mirin sake when seasoning? To get the same degree of sweetness, the amount of sugar required is about a third of that of mirin. But when soy sauce is used at the same time, sugar tastes sweeter even if the sugar concentration is the same. In terms of aroma, the combination of sugar and sake, which lessens the smell of fish and meat, is recommended.