VOX POPULI: Suga’s reluctance to speak makes it hard to figure out who he truly is 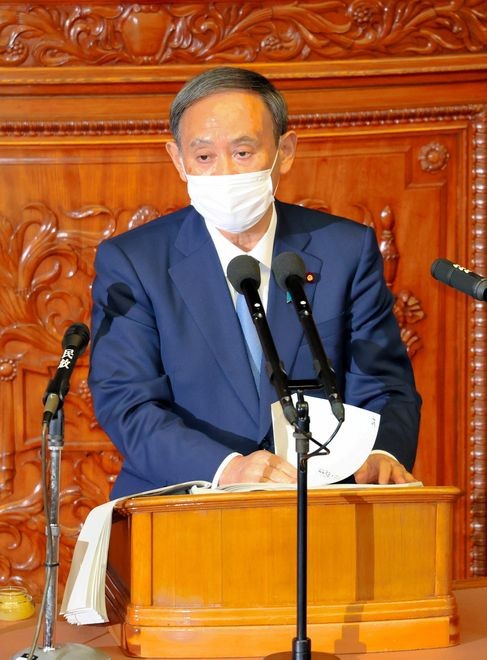 Every new prime minister strives to make a splash with their first policy speech before the Diet, it seems. Many seek to underscore their political convictions with catchy phrases.

Junichiro Koizumi preached "kome hyappyo no seishin" (literally, the "spirit of 100 bags of rice"). This derived from a historical episode about a feudal domain that allocated the meager proceeds from the sale of 100 bales of rice to education rather than to feeding the hungry populace.

Koizumi's point was to stress the need for reforms that would inevitably demand sacrifices from the public.

At the start of Shinzo Abe's first stint as prime minister, his chosen slogan was "utsukushii kuni" (beautiful nation). For Yukio Hatoyama, it was "yuai seiji" (politics of fraternal love).

They were flimsy words, but they did bring out the speakers' personalities.

I was somewhat curious to hear what Prime Minister Yoshihide Suga had to say during his first policy speech on Oct. 26.

But he let me down spectacularly--no surprise there, though.

Still, if I must pick out one phrase that sort of stood out, it was "the Cabinet that works for the people."

But wait a minute, isn't that what every Cabinet exists for?

That was tantamount to stating, "We are fishmongers selling fish."

I thought at first that Suga just didn't bother with any catchy motto. But then it occurred to me that his political philosophy is to "not to try too hard to appeal to people."

While he was chief Cabinet secretary, he responded to questions in an advice column that ran in the business magazine President, once answering, "My opinion is that in business, the ability to appeal to someone is totally incidental."

He went on to elaborate that the same holds in politics, where all that matters is the outcome.

I am worried that in Suga's mind, "not trying too hard to appeal to people" may well be synonymous with "not explaining anything."

A perfect case in point is his attitude toward the Science Council of Japan. I wonder what outcome he is aiming for with his completely arbitrary refusal to appoint six scholars to the council.

We definitely have no use for incendiary politicians. But in a democracy, how are we to deal with a political leader who doesn't--and won't--talk?