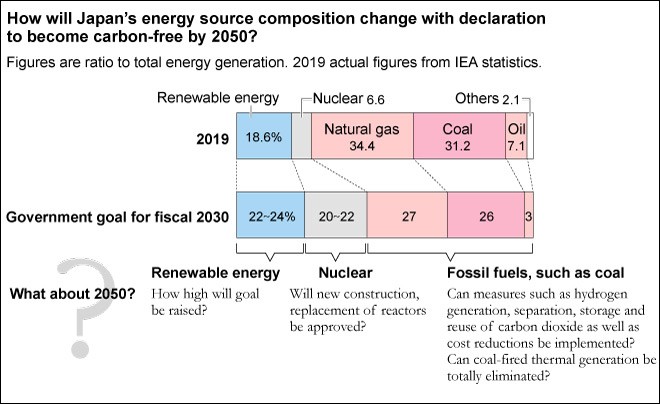 Prime Minister Yoshihide Suga’s stated goal of achieving a carbon-free society by 2050 may have come across as a bold policy initiative, but he was only placing Japan in line with targets announced long ago by 120 or so other nations.

Suga made the declaration during his opening policy speech in the Diet on Oct. 26.

Under Suga's predecessor Shinzo Abe, Japan had pledged to reduce greenhouse gas emissions by 80 percent to slow the pace of global warming.

The decision to aim for a zero net emissions goal was due to pressure from two close allies--Hiroshi Kajiyama, the economy minister, and Environment Minister Shinjiro Koizumi.

Both Kajiyama, who is tasked with overseeing the nation's energy policy, and Koizumi have attended enough international conferences to realize that Japan could no longer buck the trend toward zero net emissions by 2050.

They jointly lobbied Suga to place Japan on an equal footing to ensure it is not left behind in developing technology to help meet the emissions goal.

Although the two ministries have not always seen eye-to-eye on the issue, Suga said on a Japan Broadcasting Corp. (NHK) news program Oct. 26 that they would work as one in addressing the new goal.

That shift almost certainly swayed Suga into deciding that a zero emissions target was unavoidable.

“Even if Japan had continued to say no, it would not be able to stop the global trend,” noted a high-ranking official in the prime minister’s office. “For Japan to play a leading role in writing up new rules, a declaration of taking part had to be made.”

Kajiyama said later on Oct. 26 that his ministry would compile an action plan by the year-end to achieve the zero net emissions goal. It will include deadlines for reaching specific targets, such as for offshore wind power and hydrogen power generation, rechargeable batteries and carbon recycling.

Kajiyama added that his ministry would play a leading role in encouraging all industrial sectors to cooperate on technological development to reach the zero emissions goal.

Both Suga and Kajiyama are seeking revolutionary technological innovation.

Among the measures being considered are tax incentives and subsidies for plant investment as well as research and development in such areas as carbon recycling, including producing methanol from carbon dioxide, as well as for next-generation solar cells that would have much higher energy efficiency.

But achieving such technological breakthroughs will be both difficult and expensive. That means coming up with a specific timeline for commercializing the technology could prove next to impossible.

For that reason, Kajiyama stated that nuclear energy, although unpopular due to the 2011 disaster in Fukushima Prefecture, should be utilized as much as possible, along with renewable energy sources.

But he stopped short of saying if new reactors will be constructed or if aging ones will be replaced. Kajiyama has previously noted that the public remains wary of nuclear power generation, which he said makes it difficult for him to make such a definitive statement.

He also refrained from committing Japan to deadlines for ending dependence on coal-fired thermal plants that many European nations have done.

In his policy speech, Suga called for a drastic change in policy regarding thermal generation. But Kajiyama said that did not mean it would be eliminated altogether.

“We want to create a structure that will not release carbon dioxide into the atmosphere by continuing to utilize thermal generation,” Kajiyama said.

(This article was compiled from reports by Noboru Inoue, Keishi Nishimura, Hiroki Ito and Rintaro Sakurai.)