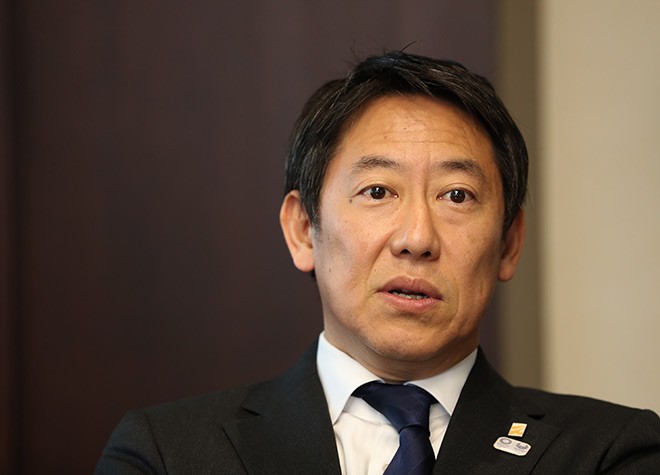 Daichi Suzuki, the former commissioner of the government’s Japan Sports Agency, in an interview with The Asahi Shimbun (Asahi Shimbun file photo)

Olympic gold medalist swimmer Daichi Suzuki is likely to run for Chiba governor with the backing of the Liberal Democratic Party’s Chiba prefectural chapter, according to senior chapter officials.

Suzuki, 53, the former commissioner of the government’s Japan Sports Agency, told high-ranking officials of the chapter that he will run in the upcoming Chiba gubernatorial election, the officials said on Oct. 25.

Born in Narashino, Chiba Prefecture, Suzuki became widely known after he won gold in the 1988 Seoul Games by coming from behind to beat then-world record-holder David Berkoff of the United States in the men’s 100-meter backstroke. Suzuki also has experience in running a government agency as the JSA’s first commissioner.

The chapter expects the election, scheduled for next spring, to be a contest between the two since it believes that Chiba Governor Kensaku Morita, 70, will not seek re-election.

Suzuki said he was interested in running for governor after Hiromichi Watanabe, a Lower House member who heads the chapter, broached the subject during their meeting over the weekend, the chapter officials said.

Watanabe said on Oct. 26 the chapter plans to officially endorse Suzuki as its candidate for the election at an Oct. 30 meeting of its LDP Diet lawmakers elected from Chiba Prefecture.

Suzuki also told other LDP Diet members that he wants the LDP chapter to rally behind him in the election, the officials said.

Junichi Ishii, an Upper House member of the chapter, told Kumagai that he will back him in the gubernatorial election. The chapter will likely officially decide to ask Suzuki to run in the election at its Oct. 30 meeting since no other Diet lawmakers of the chapter have expressed clear opposition to the plan.

Suzuki is expected to meet with Diet members in the chapter after the meeting to accept their request for him to run.

Morita has yet to reveal whether he will seek re-election, saying he is focused on carrying out his duties as governor.

“It is now typhoon season, and I also have to respond to the novel coronavirus pandemic,” he said.

But the chapter expects that the incumbent will not seek a new term as governor. Suzuki will likely officially declare his candidacy after Morita’s much-anticipated announcement that he will not seek re-election.

Kumagai, meanwhile, is weighing whether to move up the date to announce his candidacy to Nov. 2.