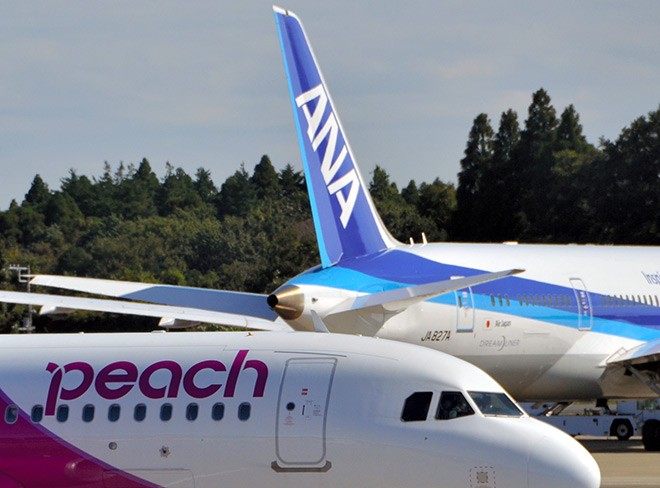 An All Nippon Airways plane next to one for the low-cost carrier Peach Aviation, a group company of ANA Holdings Inc. (Takehiro Tomoda)

ANA Holdings Inc. on Oct. 27 announced workforce changes, a focus on low-cost flights and other measures to rebound from its expected record net loss of 510 billion yen ($4.9 billion) for fiscal 2020.

The company had not announced its earnings estimate for the current fiscal year, which ends in March, because of uncertainties about travel demand amid the COVID-19 pandemic.

President Shinya Katanozaka said the company would seek to turn a net profit for the fiscal year ending in March 2022.

To reduce personnel expenses, about 100 employees will be transferred to around 10 outside companies by December. The figure will be expanded to about 400 by next spring. Those transferred will work as concierges or receptionists at their new companies, ANA Holdings said.

ANA Holdings also plans to start up a new low-cost carrier (LCC) based on its group company Air Japan Co., with medium-distance flights to other Asian countries and Australia beginning in fiscal 2022.

The new LCC will be branded differently from Peach Aviation Ltd., another low-cost carrier in the ANA group.

But ANA Holdings plans to bolster its partnership with Peach Aviation by, for example, allowing travelers to use All Nippon Airways Co. mileage points for Peach Aviation flights.

The LCCs would be used on a greater basis because their operating costs are lower than those for All Nippon Airways, and tourists are increasingly using budget airlines.

ANA Holdings also announced plans to reorganize its subsidiaries by next spring for measures that could generate profits even if its airplanes are not flying.

One specific proposal would use the data of its 36 million mileage members and customers who own credit cards issued by group companies for the sales of insurance policies and other services.

The cost-cutting measures include pay cuts for employees and executives. A hiring freeze will be introduced, and the payroll will be reduced through retirement.

Although domestic travel demand has recovered somewhat, demand for overseas flights has all but disappeared in the continuing novel coronavirus pandemic.

However, the plans announced by the company showed expectations of a slight increase in overseas flights scheduled for November until January.