EDITORIAL: Suga's pledge of being carbon-free puts Japan at the starting line 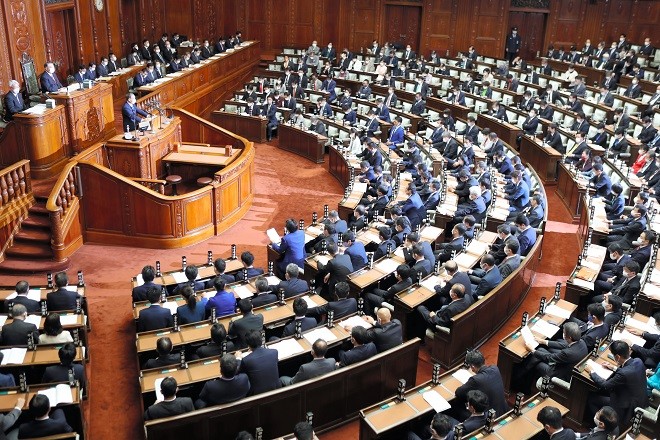 Japan will fight the climate crisis by achieving net zero emissions of greenhouse gases by 2050 to become carbon-free, Prime Minister Yoshihide Suga stated in his policy speech on Oct. 26.

But attaining this long overdue government target for the elimination of a carbon footprint from both society and industry will be a most arduous task that will require all hands on deck.

Under the Paris Agreement on climate change, the increase in the global average temperature since the Industrial Revolution must be limited to 1.5 degrees to reduce the impact of climate change. For that to happen, achieving net zero emissions of greenhouse gases by 2050 is mandatory.

About 120 nations are already committed to this target. Progress is also being made with ending coal-fired thermal power generation by switching more to renewable energies and doing away with gasoline and diesel cars.

Until now, all Japan kept promising was to "reduce greenhouse gas emissions by 80 percent by 2050," indicating no further plans of action.

With Suga's statement, Japan is finally standing at the starting line, so to speak.

But "net zero emissions by 2050" is an extremely high hurdle, which will be impossible to clear unless a 45-percent reduction from the 2010 level can be achieved by 2030.

If the government is thinking of 2050 as still 30 years down the road, it must stop at once and sharply revise its 2030 target upward.

In striving for much larger emission reductions by 2030, one cause for concern is Suga's strong emphasis on the importance of innovative technology.

There is no question that technological development for the recovery, storage and effective utilization of carbon dioxide, or for using hydrogen and ammonia to generate electricity, will help reduce greenhouse gas emissions.

But relying solely on new technologies with uncertain timetables for practical application could cause delays in the attainment of the ambitious emission reduction target 10 years from now.

What needs to be done right now is to take steps that do not require technological development.

The government should decide to end coal-fired power generation and vastly expand the use of renewables to make up for the reduced reliance on fossil fuels resulting in lower power output.

To back up the transition, the government needs to speed up the introduction of a carbon tax and emissions trading for greenhouse gases. Also indispensable is transforming the power source composition to one that centers on renewables and reforming the grid for power transmission.

To ensure the nation's stable energy supply, Suga said he will put safety first in pursuing his nuclear power policy, meaning he intends to fill the void left by coal with nuclear energy.

But from the standpoint of risk avoidance and economic viability, Japan should aim to eventually end nuclear power generation.

To ensure the goal of "net zero emissions" does not end up as an empty slogan, Suga needs to lead his administration through the test of coming up with a workable strategy that will turn Japan into a carbon-free society.