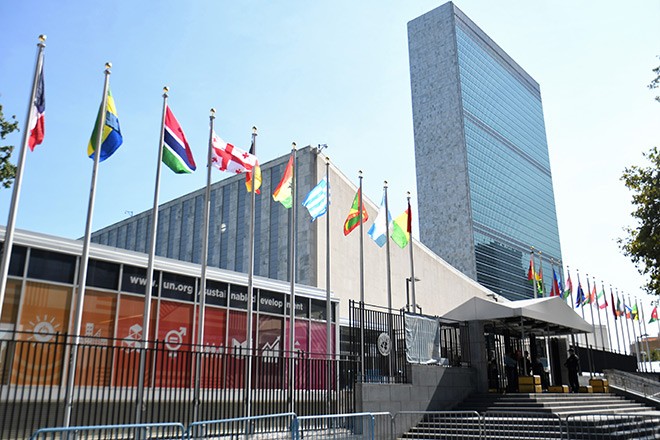 Suga notified Guterres of the pledge during a phone conversation Oct. 27 following his first address to the Diet to announce that Japan will scrap its previous target of reducing emissions by 80 percent by 2050.

Japan and the United States are the only Group of Seven nations that had shunned the initiative to work toward the same carbon neutral goal.

According to the Foreign Ministry, Japan is the world’s fifth largest emitter of carbon dioxide.

China has the dubious distinction of ranking No. 1, followed by the United States, India and Russia. Those four nations have not joined the alliance.

Japan will still rank at the largest producer of carbon dioxide among alliance nations.

Guterres contacted Suga after he gave his inaugural policy speech to the Diet on Oct. 26 to say he would like to talk to him on the phone.

Guterres said that he sincerely welcomed and highly appreciated Japan's support for its new policy of zero emissions.

Foreign Minister Toshimitsu Motegi said at a news conference on Oct. 27 that the European Union and China, as well as Britain, which will host the 26th U.N. Climate Change Conference of the Parties (COP26) next year, welcomed the new policy.

“Green recovery (to cut carbon dioxide emissions after coronavirus pandemic) will be more important to pull up our potential growth rates,” Motegi said.

The Paris Agreement signed in 2016 is an agreement within the U.N. Framework Convention on Climate Change to take measures against global warming, such as setting a goal to keep the global temperature rise well below 2 degrees, if possible 1.5 degrees, above pre-industrial levels.

Many alliance nations contend that a much higher target is needed to achieve a carbon-free society.

According to the Foreign Ministry, 121 nations, 398 cities and 786 businesses had joined the alliance as of the end of last year.