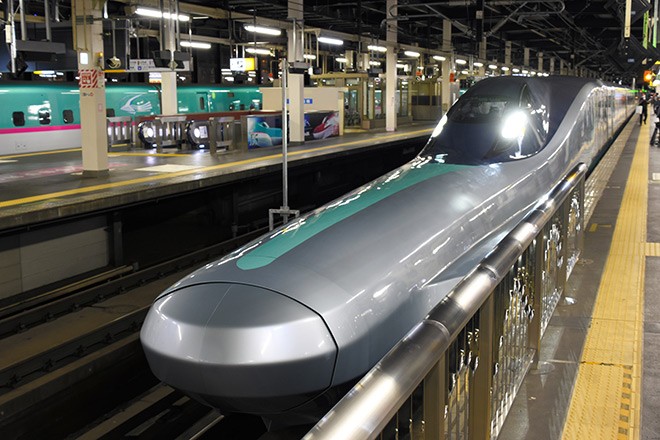 The test train, comprising 10 vehicles, left Sendai Station in Miyagi Prefecture with media along for ride at 11:38 p.m. for Morioka Station in Iwate Prefecture.

It clocked 382 kph near Ichinoseki Station in Iwate Prefecture, trembling slightly, but the ride felt as comfortable as any other Shinkansen trains in service.

The current maximum speed record set by a Shinkansen in commercial operation is 320 kph.

East Japan Railway Co. plans to introduce the Alpha-X, running at 360 kph, for commercial operation in around fiscal 2030, when the Hokkaido Shinkansen Line is expected to extend to Sapporo from Shin-Hakodate-Hokuto.

The Alpha X features extra-long noses on both its lead and tail cars, stretching 16 meters at the front and 22 meters at the rear.

The train is also outfitted with special aerodynamic equipment on its roof designed to shorten the distance it requires to stop in the event of an earthquake.

Test runs of the train have been conducted on the Tohoku Shinkansen Line twice a week or so, mostly at night, during which it hit a maximum speed of 400 kph.