‘Leftover lions are cheaper than cats’: Dark side of zoos in Japan

Earth, a male lion cub, is moved from Hiroshima City Asa Zoological Park on March 31 and becomes a new resident of the Zoo and Botanical Park in Toyohashi, Aichi Prefecture. The lion is now fully grown and walks around in a cage. (Tsubasa Setoguchi) 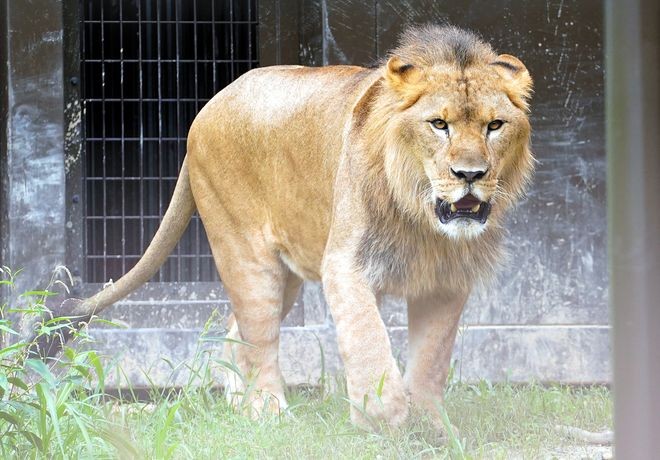 Earth, a male lion, at the Zoo and Botanical Park in Toyohashi, Aichi Prefecture, on July 23 (Tsubasa Setoguchi)

At Hiroshima City Asa Zoological Park, a male lion cub named Earth once ruled like the king of the beasts, adored by visitors.

But in reality, a lion is just a small-timer in the hierarchy of animals in Japanese zoos.

Earth was born in autumn 2018, about the same time as two other lion cubs at the zoo.

But on March 31, Earth, about a year and a half old, was loaded aboard a freight truck. He was dispatched to the Zoo and Botanical Park in Toyohashi, Aichi Prefecture, about 500 kilometers away.

At the time of his departure, Earth was the only of the three lion cubs remaining at the zoo in the capital of Hiroshima Prefecture.

The other cubs had been fostered out to another zoo for free, followed by Earth. The lion cub was too young to even have grown a mane around his neck.

The reason for his sudden departure? Earth overstayed his welcome.

“We have an excess of lions,” said Tsuyoshi Shirawa, an animal dealer who runs a company called Rep Japan in the capital of Shizuoka Prefecture.

There are plenty of lions left over, Shirawa said.

The dealer was not exaggerating.

FROM BREEDING TO DISCARDING

According to an investigation conducted by The Asahi Shimbun, during the five-year period from fiscal 2014, 14 lions were shipped out from public zoos nationwide. Eleven of them were given away for free.

The Kumamoto City Zoological and Botanical Gardens in the capital of Kumamoto Prefecture in 2015 purchased a male lion from a private zoo for 100,000 yen.

The sale was not necessarily a bargain.

Lions are prolific, with a female lion delivering about three cubs in a litter, according to Shirawa. Many zoos are eager to breed lions because their cubs delight visitors.

But once they grow older, the zoos have to deal with a high risk of inbreeding and fighting.

Rearing lions in a pride also requires a large area and copious amounts of feed.

Teruaki Takeuchi, who is in charge of species preservation and breeding at Hiroshima City Asa Zoological Park, said, “Lions are big cats. When they grow, we have to let them go.”

Takeuchi said the zoo had to say farewell to Earth for that reason.

“We don’t know what is going to happen if we keep a lion too long. We wanted (Earth) to leave the zoo as soon as we found a new home and didn’t mind not getting paid for him.”

Animals are born at zoos across Japan every day. Their births are celebrated, but the honeymoon period does not last long.

As they grow bigger and get older, zoos start looking for a new owner willing to take them in.

In the zoo business world, these animals are known as “leftovers.”

The Asahi Shimbun asked 76 local governments for information on animal imports and exports at 84 public zoos across the country.

Earth and the two cubs were born of two female lions named Elle and Amaretto.

Elle and Amaretto came to the zoo from Fuji Safari Park in Susono, Shizuoka Prefecture, on a barter deal. The zoo traded a Grant’s zebra for the pair.

The zoo has traded another zebra for a Burmese python, a cherry blossom sparrow and a miniature pig.

Trading a “leftover” animal by the barter system has been a common practice among zoos.

During the five-year period, 1,699 animals, or 34 percent of the animals that were moved out of a zoo, were involved in a trade.

Animals are typically treated as currency in such trades, Shirawa said.

“It’s like one flamingo, or one zebra, is a monetary unit,” he said.

The Zoo and Botanical Park in Toyohashi signed a deal in 2017 with Shirawa’s company, in which the zoo traded 20 gentoo penguins for a southern white rhinoceros that the company had imported.

A financial squeeze is one of the factors driving such a trade in animals.

However, not all local governments have healthy budgets capable of supporting a zoo, not to mention a pool of money for purchasing animals.

Even public zoos in government-designated cities are fortunate to have an annual budget of 500,000 yen or so for buying animals.

“We haven’t had a budget for acquiring animals since more than 20 years ago,” said Hiroko Sakurai, a section chief working at Hirakawa Zoological Park in the capital of Kagoshima Prefecture.

“We have no choice but to barter when we want a particular animal,” she said.

In spring 2016, the park had two “excess” oriental short-clawed otters.

Every year, two to three oriental short-clawed otters are born at the zoo. But as they grow older and remain with their parents and siblings, the possibility of inbreeding and clashes increases.

In the meantime, the zoo sought to acquire a capibara and a Bennett’s wallaby.

Typically, the zoo staff looked for a trading partner with another zoo. But the search was not successful.

The zoo was forced to turn to an animal trader.

Many zoos belong to the Japanese Association of Zoos and Aquariums (JAZA) and exchange information regarding excess animals through the network.

But more often than not, a perfect match is difficult to find.

Many zoos then give up on a barter deal and instead give an animal away for free, or turn to the animal dealer.

Among all barter deals that The Asahi Shimbun collected information on, 57 percent were done between a zoo and a dealer.

Hoping to obtain a capibara and a Bennett’s wallaby, the Hirakawa Zoological Park approached a well-established animal dealer in Tokyo’s Ota Ward, which went bankrupt in 2018.

In the deal, the zoo let go of a De Brazza’s guenon, two potos flavus and a red kangaroo, in addition to the two oriental short-clawed otters.

For those “leftover” animals, leaving a zoo to avoid the risk of inbreeding and fighting is sometimes followed by a tragic outcome.

In March 2016, a Grant’s zebra named Barron that had belonged to Osaka Tennoji Zoo in Osaka came in the possession of an animal dealer through a barter deal.

After being taken to an equestrian club, Barron jumped a fence and ran off to a pond on a golf course. There the zebra was shot with a blowgun dart tipped with an anesthetic agent, fell into the pond and drowned.

The animal dealer placed Barron in the equestrian club, thinking it would be the best way to familiarize the zebra with humans.

However, Barron, who grew up in the zoo throughout his life, was whipped into a panic when humans approached.

A staffer at Osaka Tennoji Zoo regretted the decision.

“It was really hard to hear that our child, whom we cherished, died,” the zookeeper said. “I never thought Barron would be left in a place that had nothing but fences that are low enough to jump over.”

In the same spring, two oriental short-clawed otters that were formerly in possession of Hirakawa Zoological Park hit the shelves at a pet shop in Shizuoka via the Tokyo-based animal dealer.

Oriental short-clawed otters are designated as “vulnerable species” on the IUCN (the International Union for Conservation of Nature and Natural Resources) Red List.

The international trade of the animal was banned in 2019 except for academic purposes. The otter needs to be properly managed and bred.

But the two otters that were sold at the Shizuoka pet shop in 2016 are now regarded as “missing.”

Sakurai, who cared for the otters at the zoo, said, “They will never be able to return to their breeding circle.”

Animals that are sold to a pet shop and others via a dealer are likely to be used as a cover for smuggling.

Under the animal law, when an oriental short-clawed otter is offered to a pet shop, the seller is required to disclose the original owner or where the animal was purchased.

If the animal was smuggled illegally, the seller won't tell the truth.

But the seller could say, “I took in an oriental short-clawed otter from a zoo and bred them,” to exploit a legal loophole.

An animal dealer affirmed, “It means so much for animal dealers involved in smuggling to see animals like an oriental short-clawed otter being released from a zoo."

Koichi Murata, a special appointment professor at Nihon University who studies zoos, sees an inherent structural problem in the institutions, which aim to preserve and study species but produce excess animals at the same time.

“People in the zoo industry need to stop for a moment and think about what it really means that the term ‘excess animals’ exists and has been used for a long time,” Murata said.

REASON FOR BEING CALLED INTO QUESTION

Tokyo’s iconic Ueno Zoological Gardens opened in 1882 as the first zoo in Japan.

During the period of the nation's rapid economic growth after World War II many public zoos opened, one after another.

Backed by a common mission, which is to provide a recreational opportunity and educate the public, zoos began importing wild animals from all over the world.

Typically, these animals were placed into small cages with iron fences and displayed in an array, for the convenience of visitors and improved visibility.

The trend changed around 1980 when Japan joined the Convention on International Trade in Endangered Species of Wild Fauna and Flora.

Protecting and preserving endangered species became a public consensus and a global standard.

Many zoos in Japan soon realized it was no longer easy to import animals from overseas.

Haruko Ichikawa, who works at Osaka Tennoji Zoo, said many zoos were overwhelmed by a sense of crisis and thought, “Unless we start breeding them ourselves, animals will disappear from Japanese zoos.”

About the same time, leisure and recreation activities began becoming increasingly diversified. Relative to that change, the value of zoos began declining.

These factors made many zoo officials realize that they were at a major turning point, facing changing times and a shift in their public roles.

Breeding endangered species, passing them on to the next generation and teaching the public the value of life through the birth and death of animals has become a new mission for many zoos.

Ironically, though, the new mission has created an environment that readily produces a surplus of animals.

(This article was part of an investigative reporting series titled, “The changing world of the zoo industry.”)