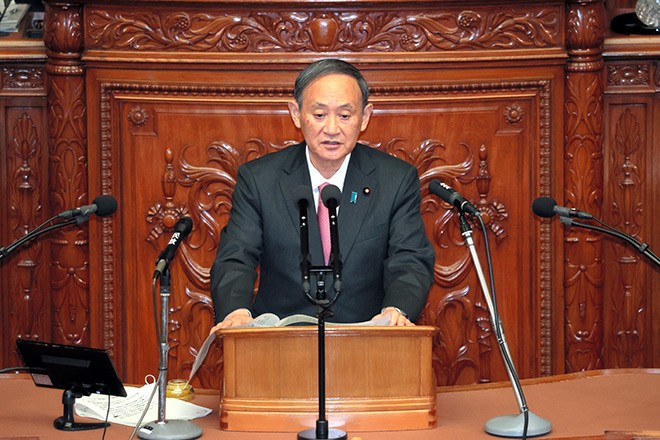 Prime Minister Yoshihide Suga comes under pressure from the opposition in the Lower House chamber on Oct. 28. (Takeshi Iwashita)

A chorus of boos and jeers drowned out Prime Minister Yoshihide Suga’s words in the Diet after he again refused to clarify his unprecedented rejection of six scholars to the Science Council of Japan.

The opposition parties had their first go at Suga in the Diet on Oct. 28 since he became prime minister in September. The session ended with another explanation by Suga that rang hollow and opposition demands for his resignation.

Yukio Edano, head of the main opposition Constitutional Democratic Party of Japan, said Suga’s decision to deny Science Council membership to the six scholars who were recommended by the council itself was “a clear violation of legal provisions.”

When Edano asked Suga to explain why he rejected the six scholars, Suga said he could not go into detail because it dealt with personnel matters.

The subsequent jeering from opposition lawmakers was so loud that it was impossible to hear what Suga went on to say.

“I made the decision, as the person with the authority to make appointments, with a focus on diversity since there are few members from the private sector or younger scholars and because I wanted to avoid a bias toward certain universities and regions,” Suga said.

Protests erupted around the country because Suga’s rejection of the six scholars was seen as retaliation for their previous criticism against government policies. Critics say the prime minister’s action violated the constitutional guarantee of academic freedom.

Suga has denied that was the case, but his explanations have been vague and unconvincing.

His “diversity” argument was immediately countered.

On Oct. 28, Takashi Onishi, a professor emeritus of urban engineering at the University of Tokyo who once served as president of the Science Council, submitted documents to opposition lawmakers about the makeup of the council.

The documents showed that diversity has already long been pushed by the council.

For example, as of October 2020, 16.7 percent of Science Council members had ties with the University of Tokyo, down considerably from 28.1 percent in October 2011, the papers showed.

In addition, the ratio of members from the Kanto region dropped from 59.5 percent in October 2011 to 49.5 percent now, according to the documents.

The ratio of female members has also been on the rise, with the current ratio at 37.7 percent.

Science Council officials said the trend was the result of a concerted effort to diversify membership in terms of gender, region, affiliation, field of study and age when selecting new members.

During the Diet questioning, Suga also said he rejected the six members from among 105 academics recommended by the Science Council.

But in a group interview with The Asahi Shimbun and other media organizations earlier in October, Suga clearly said he never saw the list of 105 recommended members before rejecting the six.

“To boldly respond ‘I made the decision while seeking a balance’ without even looking at the list of all recommended members is totally incoherent,” Edano said.

The opposition leader earlier tried to argue that Suga had no choice but to appoint those recommended by the Science Council. Edano equated the Science Council law, which calls for the prime minister to appoint new members based on council recommendations, with Article 6 of the Constitution, which states, “The Emperor shall appoint the Prime Minister as designated by the Diet.”

Suga brushed off that suggestion, saying “It is not appropriate to make a comparison based only on the wording of laws.”

While Suga was taking heat over his rejection of the scholars, his government was moving to revise the structure of the Science Council.

Shinji Inoue, the state minister in charge of science and technology policy, met on Oct. 28 with Taro Kono, the state minister in charge of administrative reform. Kono has said the Science Council secretariat and budget were subject to discussions about administrative reform, and Inoue told Kono that he would work closely with him.

Inoue later met with Ryu Shionoya, chairman of a ruling Liberal Democratic Party project team looking into reform of the Science Council. The project team plans to submit its recommendations before the end of the year.

(This article was compiled from reports by Takahiro Okubo, Hiroki Koizumi, Junichiro Ishii and Tetsuya Ishikura.)