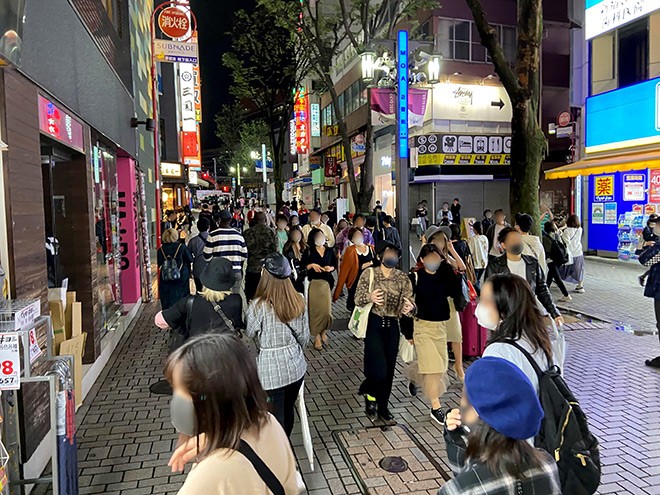 A pedestrian-only road that connects JR Shinjuku Station and the Kabukicho red-light district is nicknamed as “scout street” after men who offer women work in the nightlife industry. (Nobuaki Tanaka)

A brawl that erupted in Tokyo’s Kabukicho, Japan's largest red-light district, was apparently a flareup in a simmering turf war between a yakuza crime syndicate and a well-financed, aggressive “scouting” organization.

At stake are streets where women are “recruited” for work in the salacious nightlife industry at the center of Tokyo’s Shinjuku Ward.

Tokyo police on Oct. 28 arrested seven men involved in the fight that started just after 10 p.m. on June 4 on a busy street of Kabukicho, where many bars and restaurants were open.

Witnesses said bodies were sent flying in the melee.

Four of those arrested were affiliated with the Sumiyoshi-kai crime syndicate, including Yayotaka Yoshikawa, 49, a top member of a gang under the Sumiyoshi-kai’s umbrella, who lives in the ward. They are suspected of assault and violating the Law Concerning Punishment of Physical Violence and Others.

Police also arrested Hiroaki Nishida, 35, and his two younger brothers, who all work for the “scouting group” called Natural on the same allegations.

A 29-year-old man who belongs to Natural was injured in the brawl, according to police.

Over several days after the June incident, many men believed to be gangsters were seen searching every corner of Kabukicho for Natural members.

Some of the witnesses wrote on social media, “It’s open season on these scouts!”

However, police believe that Natural will not back down. The group is reportedly well organized and with the financial muscle capable of competing with yakuza gangs. Natural members are also not afraid to resort to violence, sources said.

Natural has butted heads with gangsters for a while over the recruiting of women for nightlife jobs at hostess clubs, girls’ bars and other adult-entertainment establishments.

A “scout” stands on a street of a bustling area and approaches women who walk by with offers of work. Typically, these scouts are not employed by such businesses, but they get paid for each referral.

Natural began its scouting operation in Kabukicho several years ago, according to investigative sources and people in the industry.

Scouts have typically worked in groups of five or so. Natural, however, deploys hundreds of scouts onto the streets of not only Kabukicho but also other nightlife districts in the Tokyo area, such as Shibuya, Roppongi and the city of Yokohama.

The incident that may have triggered the brawl was a headhunting job of a different type. Natural recently recruited a member of another scouting group related to the Sumiyoshi-kai, according to police.

A 23-year-old man who worked as a Natural scout for a year and a half until summer 2019 offered some insight into the group’s operations.

He said he was asked to join the organization by a co-worker at a restaurant where he was working part time.

The man said he studied the ins and outs of scouting from senior members and worked on the Kabukicho streets and other areas.

Some businesses used a payment system that provided a large reward for the man if he brought in a woman who proved popular and increased sales.

He said he worked the streets one to two times a week and made as much as 500,000 yen a month.

The man said he was not required to pay membership fees to Natural, but top members always drove fancy cars and wore flashy outfits.

Yakuza members sometimes approached him to mark their territory, saying, “Don’t do it from this point onward.”

He quit Natural after he found another job. The organization did not beg or order him to stay, he said.

“It was just another part-time job for me. I didn’t experience any fear. I was surprised to hear that they got into a scuffle with gangs,” he said.

Police are taking the situation seriously. They had enhanced security in the Kabukicho district in preparation for the Tokyo Olympics Games, but the brawl still occurred out in the open.

A top official of the Metropolitan Police Department said police will “stay in control of the matter and respond harshly if we find any illegal activity.”

(This article was written by Nobuaki Tanaka and Hidemasa Yoshizawa.)