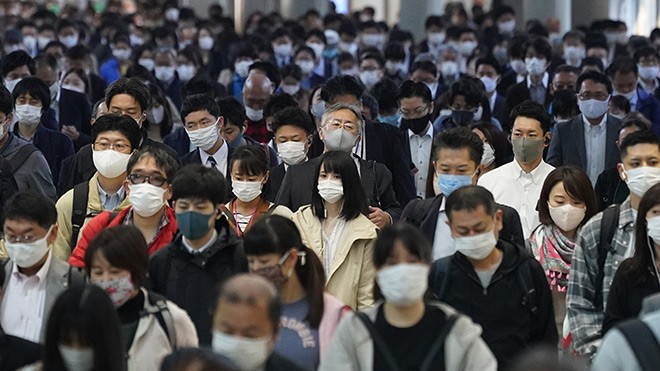 Japan marked a grim milestone on Oct. 29 as the total collective number of people infected with the novel coronavirus crossed the 100,000 threshold.

The number includes the passengers of the Diamond Princess cruise ship quarantined in Yokohama Port that became host to a large infection cluster earlier this year.

More than nine months into the pandemic, there are no signs of touching bottom, as 300 to 700 people continue to test positive daily nationwide.

Tokyo officials confirmed on Oct. 29 that 221 people have newly contracted the virus, pushing the cumulative number of COVID-19 patients in Japan over 100,000.

The first COVID-19 case was reported in mid-January. The number began to skyrocket starting in late March and then exceeded 10,000 cases on April 16.

The speed of transmission slowed for a while from May to June, but the number jumped back up again in July.

From late July to early August, the daily count of new COVID-19 cases exceeded 1,500 on some days.

The pace was less frantic compared to early August, when 10,000 new cases were reported over eight days.

Nonetheless, the daily number of new COVID-19 cases has not relented.

Cases linked to cluster infections have increased, as many people contracted the virus at restaurants and bars, hospitals, care facilities and schools.

Osaka Prefecture follows with 12,000, while Kanagawa Prefecture has reported a total of 8,000 cases.

In Aichi Prefecture, 6,000 people have been infected with the virus, while Saitama and Fukuoka prefectures each reported more than 5,000 cases in total.

Urban centers have visibly been hit hardest in the pandemic, but less-populated prefectures and rural areas are not out of the woods just yet.

Okinawa Prefecture has dealt with more than 3,000 cases so far.

Hokkaido and Miyagi Prefecture have seen an upward tick in new cases starting from late October, breaking their previous records for the daily case count.