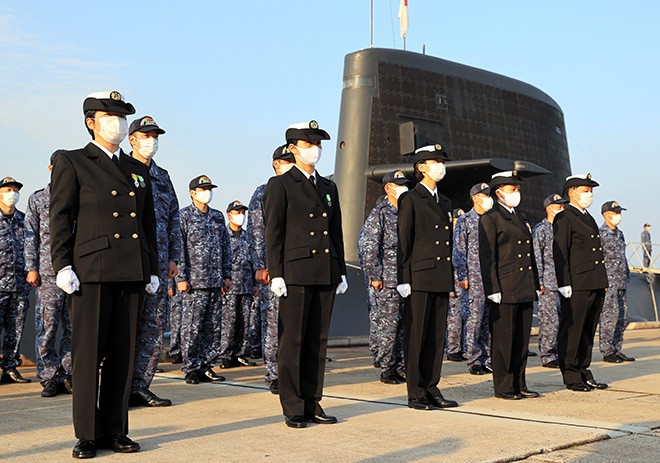 Female MSDF officers for the first time certified to serve aboard a submarine stand at attention in Kure, Hiroshima Prefecture, on Oct. 29. (Jun Ueda)

The five female officers, in their 20s to 40s, have completed their training at the Submarine Training Center at the MSDF Kure base here.

“I am extremely happy, and we have been able to improve the environment in submarines as female crew members,” Taguchi, 23, told reporters. “I would like to play an active role with other women in society.”

At a ceremony, the five were presented the dolphin badges worn by submariners by submarine Capt. Junichi Abe, who pinned the insignia on their left chests.

“Today is not the final goal,” said Abe, 50. “Stand ready to respond to any tasks as you start your career as female submariners.”

Until now, the confined spaces inside submarines have made it difficult to offer privacy for women, resulting in no female officers assigned to the crews.

But in 2018 the Defense Ministry abolished the restriction based on gender.

Special areas will be set up for female officers in submarines in the future so that they can serve aboard.

In February, the five female officers started to take the MSDF training curriculum to obtain the knowledge and skills required to serve aboard a submarine. They began on-board training aboard the training submarine Michishio in June.