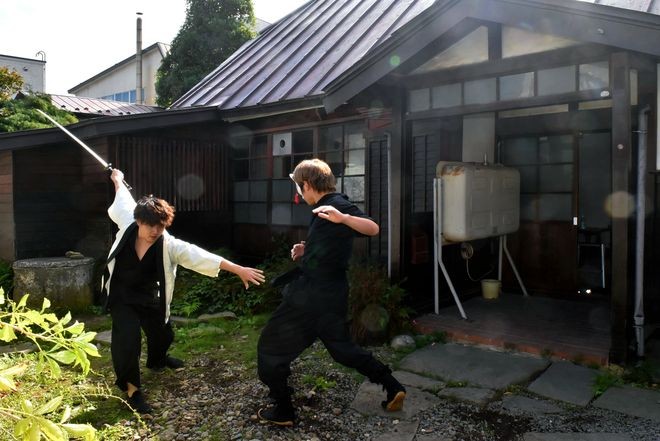 Members of the ninja club at Aomori University perform in front of the “ninja house” in Hirosaki’s Moricho district on Oct. 13. They will also show their ninja skills during a tour. (Yoshinori Hayashi)

HIROSAKI, Aomori Prefecture--An old house that was apparently designed as a ninja hideout was rescued from demolition by a city official who will turn the building into a tourist facility.

Mitsumaro Sato, 63, announced his plans at a news conference on Oct. 13, along with Shigeto Kiyokawa, a professor specializing in ninja studies at Aomori University’s Faculty of Sociology, and Hideaki Aida, 84, who had managed the house in Hirosaki’s Moricho district.

The wooden house is equipped with a variety of security measures, including “uguisu-bari” (nightingale floor), which makes chirping sounds to warn of intruders, a hidden space behind a wall, and a peephole that allows residents to watch outside the house.

Kiyokawa has been studying the “ninja house” by looking into old maps and publications associated with the Hirosaki Domain. He said the structure was apparently used as an operational base for feudal-era undercover agents in the Hirosaki Domain during the Edo Period (1603-1867).

The house was bought by Aida’s father-in-law in the 1950s. The Aidas had been managing the building after it became vacant.

However, overwhelmed by maintenance costs, he thought about demolishing the house.

“My wife heard from her father that it was a ninja house,” Aida said. “I thought I shouldn’t tear it down without a good reason, but I was troubled because I couldn’t find a buyer.”

Sato learned of Aida’s predicament and decided to buy the house to preserve it and possibly turn it into a centerpiece of tourism in Hirosaki.

“I’m sure this is a real ninja house,” Sato said. “In cooperation with Aomori University’s ninja club, the Hirosaki association for volunteer tourist guides and many other groups, I want to revitalize the city.”

He plans to renovate the house for activities and overnight stays by visitors. He also intends to host a tour for prefectural residents on Nov. 15 and 22.

In addition, Sato is considering using the building as a cultural exchange facility and for tea parties around the hearth.

Kiyokawa, who serves as an adviser to the ninja club, added: “The building is also a valuable cultural asset. I hope it will be reborn as an attractive facility.”