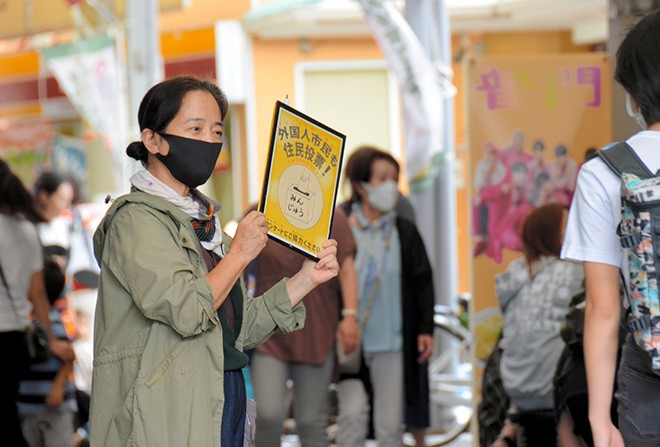 A weekend referendum on a proposal to reorganize Osaka’s administrative structure has highlighted a key question relevant to other local governments.

The question concerns the fact that foreign nationals are not allowed to vote in local elections no matter how long they have lived in Japan.

It is beyond reason that they cannot express their will over issues that their local communities face even if they live in this country like Japanese nationals, paying taxes and fulfilling other civic obligations.

The movement to allow foreign residents to vote in local elections has stalled over the past decade. But the ball should start rolling again.

The proposal is to reorganize Osaka into a metropolitan-style government by abolishing the city government and replacing it with four special wards similar to Tokyo’s 23 wards.

The law for establishing special wards in large cities, which provides legal grounds for the Nov. 1 referendum, stipulates that the provision concerning the right to vote in the Public Offices Election Law should be applied to referendums on such proposals. The provision says only Japanese nationals can vote in elections covered by the law.

This precludes foreign residents in Osaka, including many ethnic Koreans, from casting votes in the referendum. They have questioned and expressed discontent and frustration over the denial of their right to take part in a vote that has important implications for the future of their communities.

When the special wards bill, which was drafted and introduced by Diet members, was enacted eight years ago, this question was not in the minds of lawmakers who supported it.

Citizen groups submitted a petition for a revision to the law to deal with this problem during the previous ordinary Diet session. But there was little debate on the petition. It is vital to revise not only the special wards law but also the Public Offices Election Law, which is at the heart of the problem.

The question of whether foreign residents who have long lived in Japan should be given the right to vote in local elections--but not in national elections that concern foreign and security policy issues as well--began to be actively debated in the 1990s.

In 1993, the Kishiwada municipal assembly voted to call for giving such foreign residents the right to vote. It was followed by similar moves by other local assemblies.

In 1995, the Supreme Court ruled that the Constitution does not prohibit granting permanent foreign residents the right to vote in local elections, while dismissing a request for the right filed by Korean residents. The ruling has effectively left the decision up to the Diet.

In the arena of state politics, Komeito, the junior partner of the ruling Liberal Democratic Party, and some other parties have submitted related bills to the Diet.

In the late 1990s, a tripartite agreement to form a ruling coalition among the LDP, the now-defunct Liberal Party and Komeito called for giving permanent foreign residents voting rights. But the proposal failed to materialize due to strong opposition within the LDP.

In 2010, the government, led by the former Democratic Party of Japan, abandoned plans to submit a bill for the purpose. The question has since been left in political limbo.

Meanwhile, foreign residents have been allowed to vote in more than 200 local referendums conducted by local governments based on their ordinances, many of which concerned proposed mergers with other municipalities.

The central government has been promoting a policy of allowing more foreigners to work in Japan in response to labor shortage. This policy tests the nation’s commitment to accepting foreign workers as members of local communities.

Japan is a rare industrial nation that does not grant foreign residents the right to vote while banning dual nationality. The government and political leaders should recognize the urgency of tackling this issue.