Whistle-blower in Ghosn trial had to ‘tolerate good and evil’ 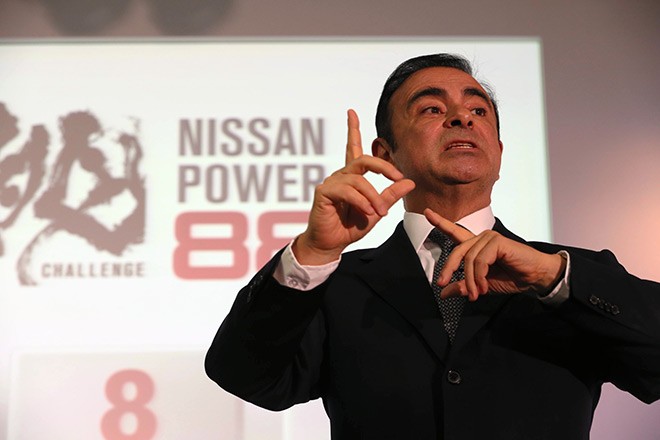 Carlos Ghosn answers questions from reporters as president of Nissan Motor Co. at a news conference on the automaker’s financial result in Yokohama in May 2013. (Asahi Shimbun file photo)

The whistle-blower at Nissan Motor Co. who helped bring down former Chairman Carlos Ghosn over allegations of financial misconduct said in a choking voice in court his job required him to take the good with the bad and he was aware that underreporting his boss’s remuneration was illegal.

Toshiaki Onuma is a star witness for the prosecution in the high-profile case being heard at the Tokyo District Court.

Greg Kelly, a former Nissan director and a U.S. citizen, is on trial for conspiring to underreport Ghosn’s annual remuneration totaling 9.1 billion yen ($86.7 million) from Nissan's financial reports over eight years through fiscal 2017.

Onuma, 61, formerly headed the automaker’s secretary’s office and was spared indictment in a plea bargain with prosecutors.

He appeared in all court proceedings since late September after Kelly’s trial opened earlier that month. Each time, he answered questions from prosecutors in an even tone without revealing his own feelings.

But on Oct. 29, his 11th appearance in court, Onuma showed a side he had not displayed before when he was asked what he thought about Ghosn.

Onuma was appointed to head the secretary’s office in 2007, eight years after Ghosn was sent by Renault SA to Japan to transform the fortunes of debt-ridden Nissan.

As soon as Onuma was informally tapped to the position, he began taking English conversation classes three times a week in the hope of being able to better communicate with Ghosn.

To compensate for his lack of English conversation skills, Onuma made a point of submitting written reports to Ghosn as well.

Whenever Ghosn was in Japan, Onuma avoided making other appointments as much as possible to ensure he would always be on hand if Ghosn needed him.

According to Onuma, Ghosn underlined “confidentiality” and “trustworthiness” as two attributes desired for the chief of the secretary’s office.

Onuma said he “was always nervous” when he met Ghosn, stating, “I feared that I could be put out of my position as head of the secretary’s office if I lost his trust.”

He said in court that although he felt something was not right about Ghosn’s reimbursement claims for travel and other expenses, he “could not voice an objection.”

Onuma said his guiding mantra was “to follow Ghosn’s instructions” to the letter and feared that raising any objection would “result in the loss of my position.”

He replied “Yes” when prosecutors asked if safeguarding his own position in the company was paramount to his decision-making.

When he had no choice but to create a report contrary to the directions Ghosn was pushing, Onuma said he used euphemistic language so as not to earn his boss's ire.

But Onuma lavished praise on Ghosn for his management skills, calling him “brilliant.” He acknowledged that Ghosn's restructuring of the company turned it around.

“He was a quick decision maker and steadfast in his decisions,” Onuma said. “His instructions were exceedingly clear-cut.”

Onuma went on to say in a choking voice that he “took pride in serving as the head of the secretary’s office” and felt the post was “challenging and rewarding.”

That sense of responsibility also came to the fore when Ghosn told him to manage his “hidden remuneration.”

Onuma said he was aware of the illegality of the arrangement at that time. At the same time, however, he thought that being asked to manage it was a show of Ghosn placing utmost confidence in him.

“I believed that my position required me to tolerate the good and evil elements,” he said.

Highly confidential documents concerning Ghosn’s remuneration were put together in a file separate from other files and stored in a lockable cabinet, he said.

Ghosn is currently living as a fugitive in Lebanon, where he has citizenship, after staging a dramatic escape from Japan while out on bail after spending months being held in detention. Ghosn said he felt he could not get a fair trial in Japan and insists he is innocent of any wrongdoing.

Japan and Lebanon do not have an extradition treaty.