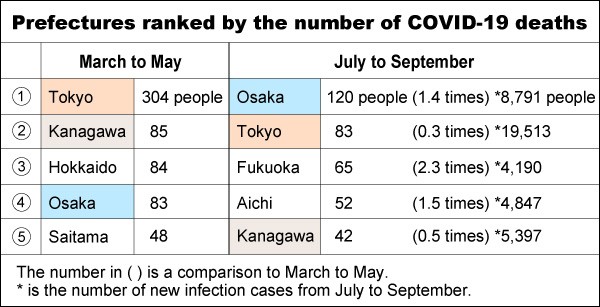 The number of novel coronavirus infections confirmed in Japan from July to September was four times higher than the figure for March to May, but the death rate from COVID-19 has dropped significantly.

Although Tokyo still accounts for the bulk of the new cases, virus hotspots are popping up in other locations around the country, and death rates have risen during the “second wave” of the pandemic in three prefectures with large urban centers.

“Infection clusters have occurred at various places,” Shigeru Omi, head of the virus subcommittee under a government expert panel, said at a news conference on Oct. 29.

He expressed a sense of crisis over the government’s delayed implementation of control measures, saying, “We must put the matter to rest soon.”

June was excluded from the comparison of the two three-month periods because the number of new infection cases that month was small. The number of tests on people with mild or no symptoms also increased in the summer, so a simple comparison is impossible.

But trends in the spread of the virus could be discerned from the available data.

Overall, the number of COVID-19 deaths from July to September was 601, a decrease by nearly 300 from the March-May period.

Tokyo confirmed about 20,000 new infections from July to September, while the number of COVID-19 deaths decreased by 70 percent in the capital.

In these three prefectures, young people infected with the virus increased in the July-September period. Subsequent to that, the number of COVID-19 patients aged 80 and older, who are more at risk of developing severe symptoms, jumped by 3.5 times to 5.6 times in the three prefectures.

In Tokyo, the number of infected people 80 or older remained almost the same.

In Kanagawa, Saitama and Chiba prefectures, which border Tokyo, the number of COVID-19 deaths in the second wave also decreased.

The number of new COVID-19 cases did not decrease significantly in Tokyo and the three surrounding prefectures after the central government lifted its nationwide state of emergency in May.

But residents in these areas were apparently more diligent in taking measures to avoid infections than people in other regions, some experts said.

The panel pointed to a failure to control cluster infections and prevent their spread to wider areas for the recent increase in COVID-19 numbers.

Hokkaido on Oct. 23 broke its daily record when it reported 51 new infection cases, including people who contracted the virus at a nursing home and a host club.

In Hirosaki, Aomori Prefecture, a restaurant became an infection hotspot in October, and the virus spread to a hospital in the city.

Big cities in the summer had to deal with the virus traveling from nightlife districts to care facilities. Cities in less-populated prefectures are now dealing with the same situation.

A report presented at the subcommittee during the Oct. 29 meeting stated that the second wave “came from Shinjuku,” a pointed reference to the nightlife district in the capital.

From late May, the number of new cases in Tokyo rose among visitors and workers at restaurants and bars where hosts and hostesses provide services to customers.

The virus then spread from Shinjuku to Osaka, Fukuoka and Aichi prefectures, according to the report.

The report also mentioned some cases in which an infection originated at a restaurant and then spread to workplaces, homes and elderly care facilities.

In the earlier period, clusters occurred at six health care institutions in the prefecture, infecting 284 people in total.

In Fukuoka Prefecture, many infection clusters that occurred in and after August were at medical institutions and care facilities, a shift from restaurants and bars.

(This article was written by Akiyoshi Abe and Kenta Noguchi.)