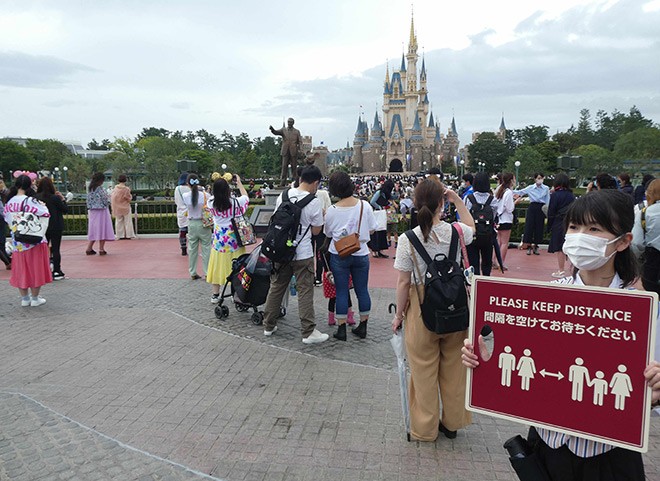 Closed for four months due to the coronavirus pandemic and limiting visitors, the operator of Tokyo Disneyland and Disney Sea projected a net loss of 51.1 billion yen ($486.7 million) for fiscal 2020.

The gloomy forecast released on Oct. 29 by Oriental Land Co. marks the first net loss since it was listed on the First Section of the Tokyo Stock Exchange in 1996.

In comparison, the company reported 62.2 billion yen in profits for fiscal 2019.

Oriental Land also said the estimated number of visitors to the twin theme parks will total 9.5 million during the year through March, a record low in the company’s history.

Both Tokyo Disneyland and Disney Sea were closed between late February and late June to help stem the spread of the coronavirus in the country.

The theme parks reopened in July, restricting visitors to half the normal levels.

As a result, there were 2.69 million visitors between April and September, less than 20 percent of the figure for the same period last year.

To ride out the crisis, Oriental Land plans to enforce a 70-percent reduction in bonuses for its roughly 4,000 regular and fixed-term employees.

As for about 1,000 dancers and other staff, the company has recommended that they change jobs or quit.

At an Oct. 29 news conference, Akiyoshi Yokota, executive director of the company, said although Oriental Land hopes to maintain its payroll, it already has had some employees resign.

“We let some dancers go because we cannot offer shows for some time,” he said.

Oriental Land is faced with the challenge of increasing earnings at a time when most visitors are not returning to their resorts due to fears of infection.

“We are aiming at improving earnings by making new investments in the development of theme parks and by raising average customer spending through a review of ticket prices and other measures,” Yokota said.

(This article was written by Yoshikatsu Nakajima and Aki Sato.)