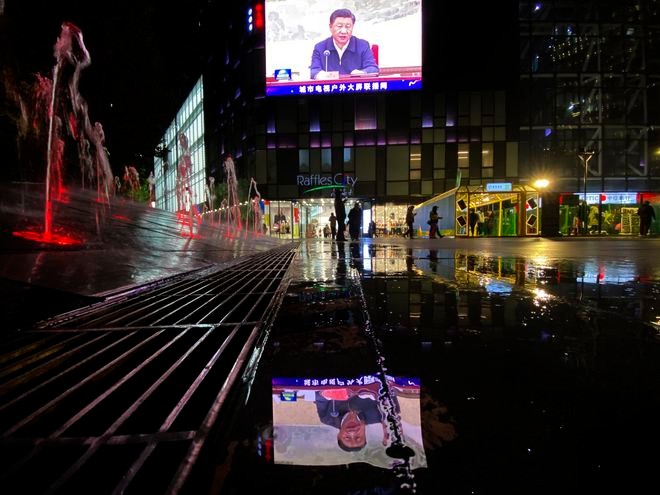 Chinese President Xi Jinping is seen on a big screen during a news broadcast outside a shopping mall in Beijing on Oct. 30. (AP Photo)

China’s economic policy agenda for the next five years and beyond raises concerns that Beijing is trying to turn the country into a superpower that is ready to close its doors to the rest of the world, if necessary.

China’s ruling Communist Party laid out a vision for the future of the nation at a key meeting of its Central Committee, the party’s supreme policy-setting organ. The high-stakes conference, called the fifth plenary session of the 19th Central Committee, was held in late October.

The focus of attention was on the medium- and long-term plans for the country’s economic development that were to be adopted at the meeting. The new economic plan to cover the five years starting in 2021 is reportedly aimed at transforming China’s trade-driven economy into one more powered by domestic demand.

China’s rapid economic growth over the years has been fueled mainly by expansion of trade and foreign investment triggered by the “reform and opening-up” program for overhauling the nation’s socialist economy that Beijing launched in the late 1970s.

How to ramp up consumer spending at home has long been cited as a key economic policy challenge for China.

The Chinese government, however, has recently stepped up its rhetoric in stressing the importance of developing a “vast domestic market” apparently in response to the impact of China’s increasingly acrimonious confrontation with the United States and the new coronavirus pandemic.

It appears that Chinese leaders want to make a policy shift to a new economic development model designed to ensure stable and self-sustained long-term growth by limiting the damaging effects of a possible stoppage of economic exchanges with the outside world.

The conflict between the United States and China is intensifying especially in high-tech areas, including fifth-generation (5G) wireless technology.

China says it will focus on technological innovations in its policy efforts to achieve its “scientific and technological independence” as the core goal of its new development strategy.

As part of its efforts to accomplish this long-term goal, Beijing will seek to raise the country’s per-capita gross domestic product to the level of “moderately developed countries” by 2035, according to the economic policy agenda that has emerged from the party meeting.

What is worrisome, however, is that the shift of focus in China’s economic policy from trade to domestic demand clearly echoes its inward-oriented strategy for beefing up its national power.

Even before these new policy goals were formally adopted, Chinese leaders were invoking political slogans used during the era of Mao Zedong’s rule, such as “regeneration through our own efforts” and “war of attrition.” These phrases appear to suggest that China is pushing itself into self-imposed isolation.

The Chinese government has made notable moves that seem to be intended to accelerate the “decoupling” of the world’s two largest economies in its reprisals against Washington’s economic sanctions.

China’s new export control law, enacted in October, has made many foreign companies uneasy due to its lack of transparency.

Beijing has also kept making abrupt moves to punish countries that have incurred its wrath by suddenly imposing restrictions on trade with them.

The original cause of the current confrontation between Washington and Beijing was China’s unfair policy concerning foreign access to its markets. The United States criticized China for giving domestic businesses unfairly favorable treatment, forcing foreign companies operating in China to transfer their technologies to the country and infringing on their intellectual property rights.

China’s selfish policy of denying foreign countries the benefits of the global free trade regime while fully taking advantage of them is simply unacceptable.

Chinese leaders should never forget that their country’s affluence depends on the international community’s expectations for and trust in the openness of China’s economy.