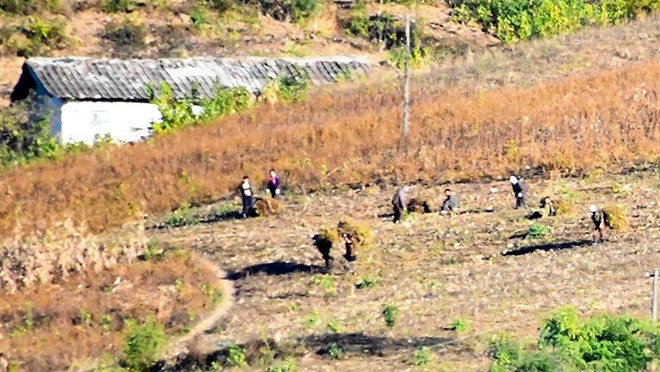 North Korean farmers near the Chinese border harvest their fields in October. Drought has led to forecasts of a third straight year of poor harvest. (Yoshikazu Hirai)

China has come to North Korea's aid yet again by providing vast amounts of food assistance and also 550,000 tons of fertilizer to help the reclusive and impoverished country recover from summer typhoon damage that ravaged farmland.

North Korea is reeling from a triple blow of years of international economic sanctions, the closure of its border with China this year to prevent a spread of the novel coronavirus and a disastrous summer that resulted in widespread food shortages.

China traditionally has been a staunch ally of North Korea, but ties between the two countries soured from around 2013 after Pyongyang conducted a series of underground nuclear tests and began launching new types of ballistic missiles to demonstrate its military prowess against a hostile world.

“I will risk everything to support North Korea,” a former high-ranking North Korean government official quoted Xi as telling Kim during the meeting.

Under international norms, food assistance is considered humanitarian aid and not subject to sanctions imposed by the U.N. Security Council to force North Korea to abandon its nuclear ambitions.

Ever-secretive, China did not divulge the extent of its food assistance to North Korea in 2019 or this year.

But several South Korean government sources said China has provided North Korea with between 500,000 and 600,000 tons of food along with the fertilizer this year.

It also sent about 600,000 tons of corn and other types of grain between June and August, according to Chinese sources with inside knowledge of ties with North Korea.

Pyongyang requested more assistance in the aftermath of the summer typhoon damage and Beijing is considering sending an additional 200,000 tons of food, the sources said.

The South Korean sources focused on the volume of fertilizer shipped to North Korea as such assistance is considered highly unusual.

“Due to chronic shortages, fertilizer is highly prized in North Korea,” the official added. “The amount sent this year is equivalent to 5.5 million tons of food, which exceeds the yearly production of food. It was a very unusual level of assistance.”

Although North Korea is no longer in the grips of famine that raged in the late 1990s and claimed countless lives, the U.N. World Food Program has estimated that between 2018 and 2019 about 10 million North Koreans did not have enough to eat.

The situation is believed to be worse this year.

North Korea was plagued by flooding and other damage due to typhoons and torrential rain in summer after near-drought conditions in spring.

A source at a Chinese government-affiliated agency who is well-versed in issues involving North Korean agriculture said that the harvest estimate at planting time was between 3.5 million and 3.8 million tons for a shortfall of about 1.5 million tons.

Rice prices were kept stable through the release of grain stockpiled for emergencies, but the situation without China's assistance was expected to be dire from next spring.

China's decision to bail out its unpredictable neighbor may reflect a strategy to keep North Korea in its corner as Beijing’s confrontation with Washington worsens. In this regard, Beijing made a big fuss of its involvement in joining fighting in the Korean War on the 70th anniversary of China's participation.

With no signs of progress in denuclearization talks with the United States, the easing of economic sanctions against North Korea appears unlikely in the short term.

That suggests North Korea will continue to lean on China for support, analysts said.

“If North Korea receives support from abroad, it will no longer be able to say it is getting by with its own efforts,” said a South Korean expert on the North Korean economy. “But North Korea can continue to save face because China does not announce the assistance levels.”

North Korea remains one of the few nations to repeatedly express support for China’s implementation of a state security law regarding Hong Kong.

(This article was written by Takeshi Kamiya in Seoul and Yoshikazu Hirai in Shenyang.)