In the darkness, village in Nagano shines as best site for stargazing 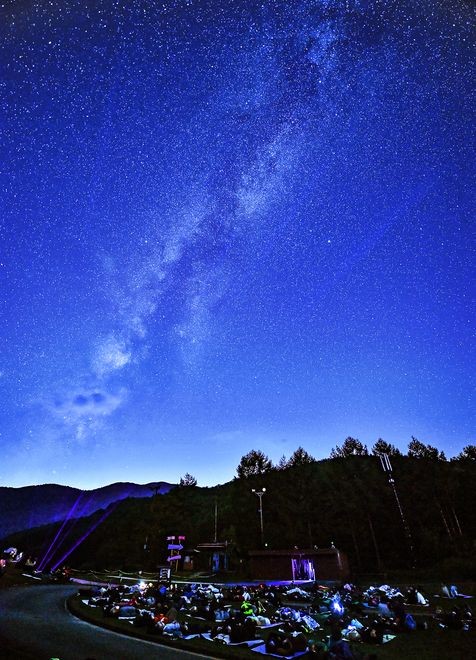 The Milky Way can be seen on the far side of laser beams emitted from a tour guide’s pointer in Achi, Nagano Prefecture, on Oct. 12. (Tatsuo Kanai)

ACHI, Nagano Prefecture—Once known for its hot springs, the village of Achi is now bringing in hordes of visitors as the home to “Japan’s most beautiful starry sky.”

In the Environment Ministry’s “Star Watching Network” survey in 2006, Achi was recognized as the best location in Japan for observing stars based on darkness levels.

Recently, stargazers lying on grass at the Fujimidai Highlands in the village were immersed in darkness when the illumination was turned off after a 10-second countdown.

Cries of admiration rang out after their eyes adjusted and the Milky Way emerged in the sky.
Nighttime sky-viewing tours organized in Achi for watching the starlit sky have become so popular that they attracted around 160,000 visitors in 2019 to the village with a population of only about 6,000.

Achi previously used its Hirugami Hot Springs to promote itself as an “onsen” resort. The village brought in many visitors, including those on company trips, during Japan’s asset-inflated economic growth of the late 1980s.

A group of three Achi residents, including Hitoshi Matsushita, was the first to put the village’s starry sky “on sale.” Matsushita, 42, was working for an inn at the time.

He was looking for a breakthrough measure to attract more visitors in 2011, when an employee of an Achi ski resort told him, “When I am up in the mountains on night duty, stars sometimes come into my view, and I find them so beautiful.”

The trio went up to the highlands of the ski resort on the night of that day. They saw a skyful of stars, which they realized was unimaginable in urban areas.

In about a year, Matsushita and his colleagues started their “starlit night tours,” which involve taking a 15-minute or so ride on a cable car gondola up the ski slope.

They received no subsidy, however, and the tour guides were part-timers who were not even interested in stars.

The tour organizers went so far as to arrange a ribbon-cutting opening ceremony, but only three participants attended the celebration.

“That’s a funny story now, but I really felt disheartened at the time,” Matsushita said.

Fortunately, smartphones and social media were coming into fashion around that time. Word spread, and the tours began attracting several hundred participants a day in only about two weeks.

To stage the scene, the tour organizers use strong illumination to keep the surroundings brightly lit so that participants cannot immediately see the stars when they are up in the mountains. They only view the ocean of innumerable stars when all illumination is turned off at 8 p.m.

“Our village is the darkest (at night) in Japan,” Matsushita said. “But that has allowed us to draw on our starlit night sky, which is the most beautiful in the country.”

HOW TO GET THERE

Visitors arriving by a Chuo Line train should get off at JR Nakatsugawa Station, reserve a seat on a bus, and travel for 40 minutes to get to the tour venue.

Those arriving by car exit the Chuo Expressway at the Sonohara Interchange and drive for 10 more minutes to get to a parking lot beside the cable car Sanroku Station.

The starlit tours for this fiscal year will run through March 28. Gondolas start operating at 6 p.m., and the tours end at 8:30 p.m.