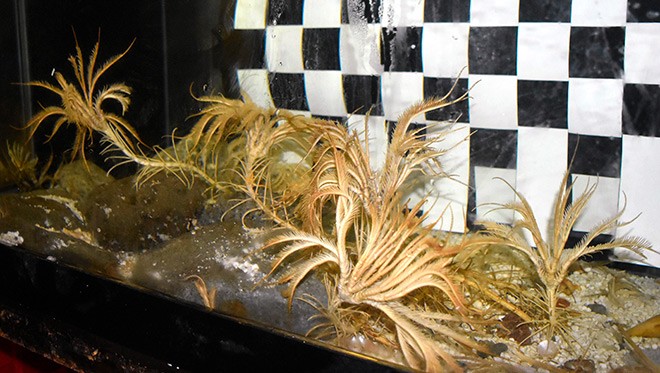 NAGOYA—Sea lilies developed their peculiar tactic of shedding a feathery arm to survive attacks from predators at least 250 million years ago, researchers said.

The scientists from Nagoya University and elsewhere made the discovery after comparing sea lilies caught in Japan with a fossil unearthed in the United States.

“We will examine whether the species amputated its arms even earlier to determine when the anti-predator strategy began,” said Tatsuo Oji, a paleontology and zoology professor at the university.

Sea lilies resemble their terrestrial namesakes, but the bottom-dwelling marine species belongs to the echinoderm group, which includes sea urchins and starfish.

When fish and other natural enemies assault sea lilies, they can “drop” an arm that starts to thrash. The detached arm is thought to divert the predators' attention away from the bodies of the sea lilies.

Oji and his colleagues in autumn 2019 caught sea lilies 140 meters below the surface in the northeastern part of Suruga Bay of Shizuoka Prefecture. They were placed in a tank surrounded by a corrugated box to reproduce a seafloor environment.

Their severed arms left radial and other designs on the sand on the tank bottom.

The researchers examined sea lily fossils for similar designs. They found a pattern with the same characteristics on a fossil unearthed in Utah from a stratum dating back to the early Triassic Period (250 million years ago).

Sea lilies are sometimes called “living fossils” because they have retained their primitive features. They spread their many arms on the seafloor to feed on diatoms and plankton.

The team’s findings have been published in the online edition of the Scientific Reports journal at (https://www.nature.com/articles/s41598-020-72116-1).