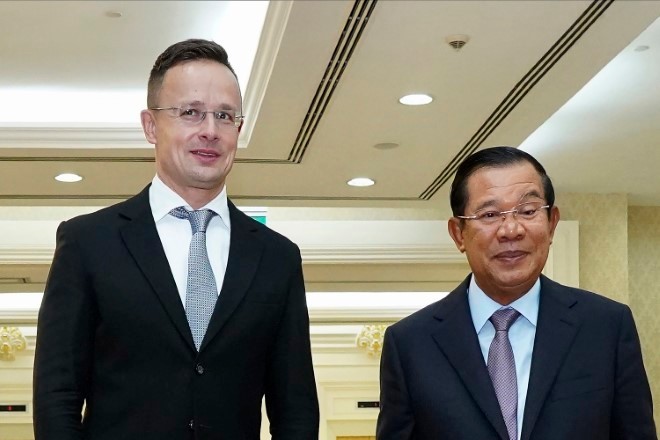 BANGKOK--Hungary’s minister of foreign affairs and trade tested positive for the coronavirus after arriving in Thailand for an official visit, Thai and Hungarian officials said Wednesday.

Thai Health Minister Anutin Charnvirakul said Peter Szijjarto and his 12-member delegation were tested after their arrival Tuesday from Cambodia, but only the foreign minister was found to be infected.

He said Szijjarto, who was tested twice, was sent to Thailand’s Bamrasnaradura Infectious Diseases Institute for treatment pending his planned evacuation later Wednesday by plane back to his homeland. The 42-year-old foreign minister will return on one plane and the other members of his party in a separate aircraft, Anutin said.

The Hungarian delegation was supposed to make a two-day visit aimed at strengthening ties, especially in economic matters. They were to pay a courtesy call on Thai Prime Minister Prayuth Chan-ocha and meet with Szijjarto’s Thai counterpart, Don Pramudwinai, but all their appointments were canceled.

Szijjarto wrote on his Facebook page that he was planning to return to Hungary on Wednesday evening.

“I wouldn’t wish this situation on anyone,” he wrote, without giving details of his illness.

He praised the Thai authorities for their assistance.

A statement issued by Cambodia’s foreign ministry said Szijjarto had tested negative for the coronavirus before leaving Hungary on Monday to go to Cambodia. It said that after learning that he had tested positive in Thailand, the Cambodian government advised all people who had been in contact with him to be tested and quarantine themselves according to health ministry guidelines.

During his visit, Szijjarto paid a courtesy call on Prime Minister Hun Sen and held separate meetings with Foreign Minister Prak Sokhonn and the ministers of commerce and agriculture. Photos of the meetings showed Szijjarto not wearing a face mask to guard against the coronavirus when meeting with Hun Sen and Prak Sokhonn, though other members of the Hungarian delegation did. Prak Sokhonn did not wear a mask and greeted his visitor with a handshake.

Hun Sen on his Facebook page said he was tested for the coronavirus after learning of Szijjarto’s infection and the results showed he didn’t have the disease. He said his wife and 16 of his staff--bodyguards and drivers--also tested negative.

He said he would abide by the country’s coronavirus guidelines and stay quarantined for 14 days, during which he would not meet with family members or attend public events.

Cambodia sees Hungary as one of its closer allies in Europe. Both countries have strongman rulers who are at odds with liberal Western nations. Cambodia has expressed gratitude for Hungary’s dissent from the decision by the European Union, of which Hungary is a member, to cut trade privileges for Cambodia. The EU took the action earlier this year after judging that Hun Sen’s government failed to respect labor and democratic rights.